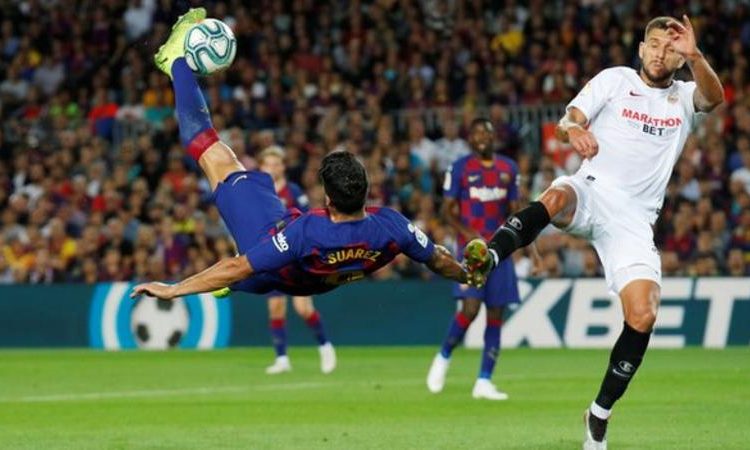 Luis Suarez scored both goals as Barcelona came from behind to beat Inter Milan in the Champions League on Wednesday (Image credit: Reuters)

Luis Suarez scored a sublime overhead kick as champions Barcelona climbed to second in La Liga with a convincing win over Sevilla at the Nou Camp.

Suarez opened the scoring with an acrobatic finish after 27 minutes, before Arturo Vidal and Ousmane Dembele put the hosts in complete control.

Lionel Messi completed the scoring with a delightful free-kick late on.

Barcelona had 20-year-old debutant Ronald Araujo and Ousmane Dembele sent off in the closing stages, after Araujo brought down Javier Hernandez when last man – and Dembele was shown a second yellow card for dissent in the aftermath.

They move to within two points of leaders Real Madrid heading into the international break, after Zinedine Zidane’s side beat Granada 4-2 on Saturday.

Meanwhile, Atletico Madrid were held to a third goalless draw in four league matches against Real Valladolid earlier on Sunday.