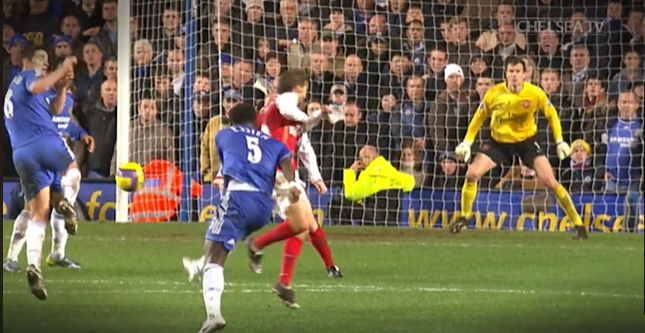 It’s been described as one of the best Premier League goals of all time and despite the number of great goals scored in the world’s most-watched football league, Michael Essien’s stunning strike for Chelsea in 2006 stands tall.

Facing London rivals Arsenal in a blockbuster at Stamford Bridge in December, Chelsea were on the verge of slipping to a nine-point deficit to then league leaders, Manchester United.

Mathieu Flamini’s 78th-minute strike had given the Gunners a very important lead at the home of the defending champions.

With only six minutes left, Frank Lampard picked up a pass from Arjen Robben and laid the ball off to the onrushing Essien who hit a swerving piledriver from all of 35 yards, which flew past Lehmann before he could do anything about it.

At first glance, it was a very good goal, but from other angles, it was clear just how outstanding the goal was.

Despite it being about 13 years old, the goal is still clearly a favourite of football fans and the celebration by Mourinho at the end has immortalised it in league history.

While some have taken this opportunity to assess the player’s impact on the Premier League as a whole, others can’t help but admire the strike with many arguing that it’s one of the best the league has ever seen.

That pass from Lampard, the drive absolutely magnificent. Nobody expected the Bull to drive from that range. What a beauty to watch and you can see how Mourinho celebrated that goal 😂

One of the best era of THE EPL.

WHAT A SHOT ESSIEM MADE MORINHO DANCE

TBH, Essien knew he was going to score the moment he hit the ball…he started running before the ball went pass the keeper