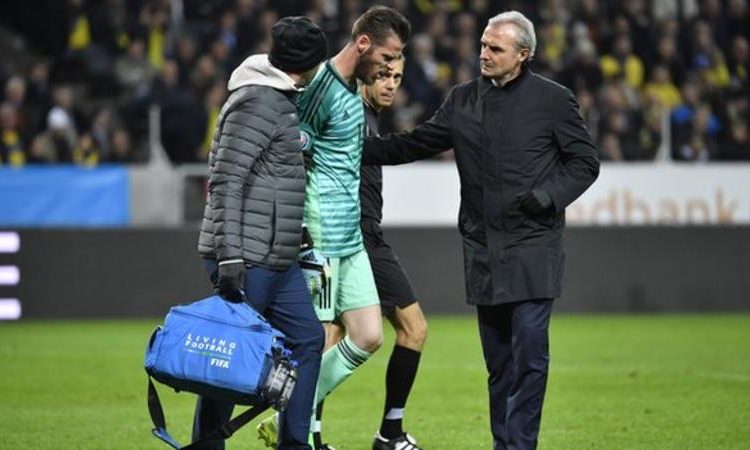 David de Gea started in Sweden after being left on the bench against Norway last week (Image credit: EPA)

Goalkeeper David de Gea is a doubt for Manchester United’s Premier League game against Liverpool on Sunday after coming off injured on Spain duty.

The 28-year-old appeared to hurt his hamstring during his country’s Euro 2020 qualifier in Sweden.

He was replaced by Chelsea’s Kepa Arrizabalaga after an hour in Stockholm with his side trailing 1-0.

An injury-time Rodrigo equaliser earned a 1-1 draw and secured Spain’s spot at the Euros.

De Gea’s injury came in innocuous circumstances – he immediately grabbed the back of his leg after clearing a backpass from his own player.

He sat on the ground in his six-yard box before making his way off the pitch alongside the physios.

United are 12th in the Premier League and have not won in their past three top-flight games.

They will face a Liverpool side aiming for an 18th consecutive Premier League win, a total that would equal the record held by Manchester City.

De Gea was critical of his side’s performances this season after their last match – a 1-0 defeat at Newcastle – saying:

“The whole season isn’t acceptable for us. We have injuries but it’s not an excuse. We are Manchester United. We need to train hard to keep fighting and to get back to winning games.”

If De Gea is unable to feature at Old Trafford at the weekend, Argentine Sergio Romero – who has featured in the Europa League and Carabao Cup this season – is likely to replace him.