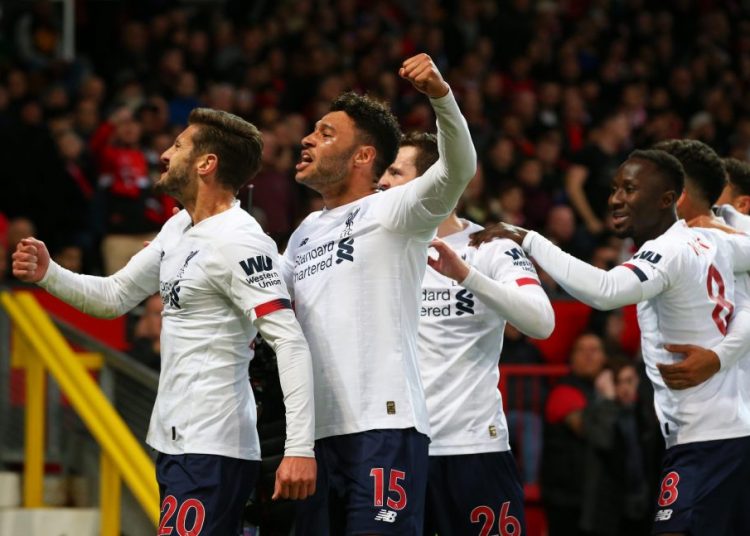 Adam Lallana scored his first Liverpool goal for 18 months to secure a point for Liverpool against bitter rivals at Manchester United.

Marcus Rashford’s controversial strike in the first half seemed destined to be the winner, but Lallana came off the bench to strike with just five minutes of normal time remaining to ensure the match ended 1-1.

The Red Devils were perhaps fortunate to be given the lead, with VAR backing referee Martin Atkinson’s on-field decision not to award a free-kick to Liverpool in the build-up for a challenge from Victor Lindelof on  Divock Origi.

The men from Merseyside were left fuming as Sadio Mane then had a goal ruled out by VAR for handball. But given how poorly his side played, Jurgen Klopp would have been happy to settle for a point in the end.

Liverpool was the first to threaten but after some good work, Georginio Wijnaldum wasted the opening with a weak shot which hardly troubled De Gea.

United’s reply came from Scott McTominay but his effort from the edge of the area was just as tame as his Liverpool counterpart and the game remained goalless with half an hour gone.

Liverpool’s best opening of the half then fell to Roberto Firmino but his shot was under-hit following good work by Sadio Mane.

However, United claimed the lead with 10 minutes of the half remaining as Rashford scored from close range, with the goal standing following a VAR check for Lindelof’s challenge on Origi before United broke to score.

Liverpool thought they had equalized just before the break but again a VAR ruling went against them.

Mane got to a high ball ahead of Lindelof and rolled it past De Gea but the goal was chalked off after the forward handled as he tried to control the ball.

Liverpool searched for an equalizer but the closest they came was with 20 minutes remaining through substitute Alex Oxlade-Chamberlain’s dragged effort.

The visitors enjoyed more possession in Manchester United’s half, however, they were suspect on the counter-attack with Rashford firing narrowly wide from the edge of the area in the 67th minute.

Another fast break eventually saw the ball fall to Fred in the Liverpool penalty area moments later but the Brazilian midfielder sliced his effort wide.

Fred curled another effort just wide as the hosts looked the most likely to score the next goal.

But Liverpool found the back of the net with five minutes remaining when a driven Andrew Robertson cross eluded the United defense for an unmarked Lallana to tap in from close range at the far post.