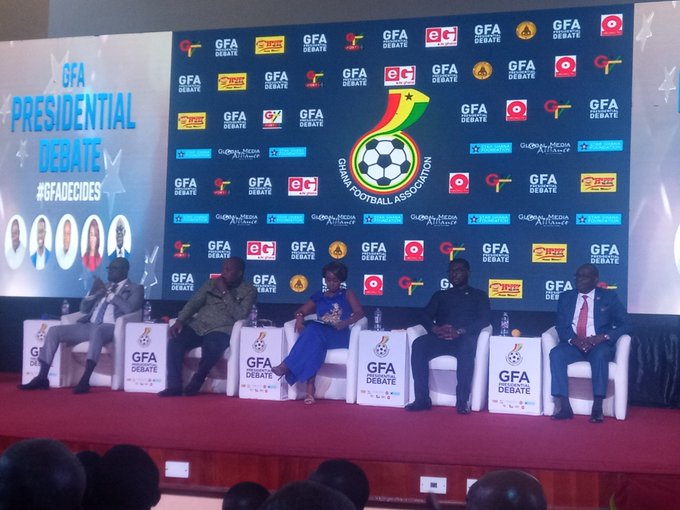 The Normalisation Committee of the Ghana Football Association has organised a first ever debate for the candidates vying for the Association’s presidency.

The event was held at the College of Physicians and Surgeons in Accra and it offered the chance for the candidates to share their thoughts, ideas and vision for Ghana football should they get elected into office.

The debate saw candidates sharing their ideas on various topics including developing football at the grassroots, refereeing, growing football infrastructure, fighting bribery and corruption, and enhancing the quality of the local league.

The candidates opened the event with initial 3-minute statements of their plans and then, they were given the various questions to answer while room was given for rebuttals.

What were some of the issues?

Following the incidents of the Anas “Number 12” documentary, corruption in football has become the biggest issue in Ghanaian football and the candidates gave their takes on the matter and how to deal with it.

Nana Yaw Amponsah, for instance, said that an FA, under him, would reward those who brokered sponsorship deals for the league with a commission but he was countered by the George Ankomah Mensah who said that the move was not necessary. He added that no member of the FA should be involved in acts like seeking sponsorship.

Fred Pappoe said that he would open the GFA up to public scrutiny and there would be a code of conduct for members of the FA.

Kurt Okraku stated that he would ensure full compliance to the club licensing rules.

All the candidates admitted that the level of refereeing needed to be improved in the country and their solutions covered areas such as organising refresher courses for referees, encouraging young referees into the game and making refereeing attractive to the point of getting people to take it on as full time employment.

What about the local league?

George Ankomah Mensah stated that he would seek to make the league-going experience for fans a fuller one by adding elements such as the purchasing of merchandise at the stadia.

Kurt Okraku focused on re-packaging the league to make it more attractive to fans and other candidates like Fred Pappoe followed the same tangent. The re-packing idea looked at marketing, sponsorship, better wages and salaries as well as match centres that are violent-free.

Amanda Clinton opted for the option of the FA running independently in order to generate its own money to run the national teams.

Kurt Okraku chose the route of marketing each of the national teams in order for them to make their own money to take care of their activities.

How do we handle and fund our national teams?

George Ankomah Mensah was of the opinion that there was the need to reduce the huge expenses on the national teams in terms of bonuses.

In addition, he said that Ghana needed to develop a lot of players to feed the national teams and that would create enough competition so that players would be eager to feature for Ghana.

Nana Yaw Amponsah said that the FA should take money from government in the form of loans to run the national teams and that would compel the FA to use prudent means of taking care of the teams.