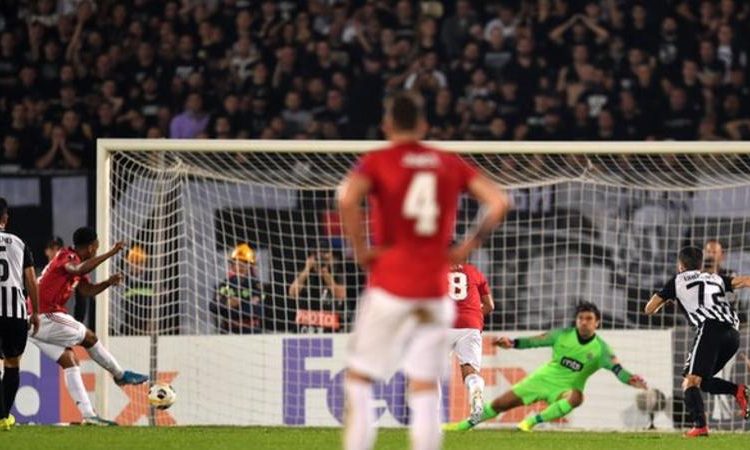 Ole Gunnar Solskjaer says his Manchester United side need to “try to build momentum” after Anthony Martial’s penalty secured their first away win since March at Partizan Belgrade.

It ensured United moved top of their Europa League group and will qualify for the knockout stages if they beat Partizan in the reverse fixture at Old Trafford on 7 November.

“We need to win away from home in the league, but another clean sheet and that gives you a platform to win games from,” said Solskjaer, whose team last won a Premier League away game in February at Crystal Palace.

Williams’ burst forward to draw a foul from Nemanja Miletic was one of the the few bright spots in an otherwise uninspiring United display.

It helped Solskjaer’s team to their first win away from home in 11 attempts with their only shot on target.

Williams and 18-year-old midfielder James Garner were among seven changes made by United’s Norwegian boss from the side that started in the Premier League against Liverpool on Sunday.

However, the hosts carved out chances of their own with on-loan Roma forward Umar Sadiq bending a 20-yard strike against the post.

United keeper Sergio Romero superbly preserved the visitors’ lead by parrying Seydouba Soumah’s drive after the midfielder cut past Harry Maguire, as Solskjaer’s side hung on to record their first win on their travels since their Champions League victory over Paris St-Germain.