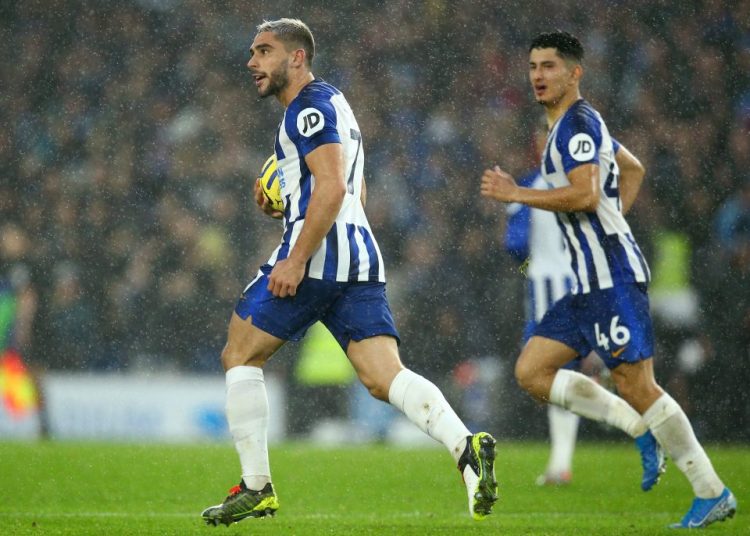 21
SHARES
0
VIEWS
Share on FacebookShare on TwitterShare via Whatsapp

Brighton took advantage of two huge slices of luck to snatch a dramatic 3-2 victory over Everton in the Premier League on Saturday.

Lucas Digne turned into his own net in stoppage time to ensure the hosts grabbed all three points after VAR took centre-stage once again.

Neal Maupay levelled from the spot for the hosts in the 80th minute after Aaron Connolly was adjudged to have been fouled by Michael Keane.

While VAR has been strict awarding penalties so far this season, the apparent ‘stamp’ on Connolly’s toe appeared soft.

It denied Everton a comeback of their own after an own-goal from Adam Webster and a strike from Dominic Calvert-Lewin put the Toffees in front following Pascal Gross’ early free-kick.

And the Amex wasn’t the only ground to see VAR controversy. Man City’s second goal in their 3-0 victory over Aston Villa earlier today was allowed to stand despite Raheem Sterling interfering with play while seemingly in an offside position.

Elsewhere, Sheffield United continued their impressive start to the season by nicking a 1-1 draw with West Ham.

Lys Mousset came off the bench to cancel out Robert Snodgrass’ opener at the London Stadium.

Meanwhile, Watford’s long wait for a Premier League win continues following with a 0-0 draw at home to Bournemouth.

The Hornets stay rock-bottom of the table, without a single victory in their opening ten games.