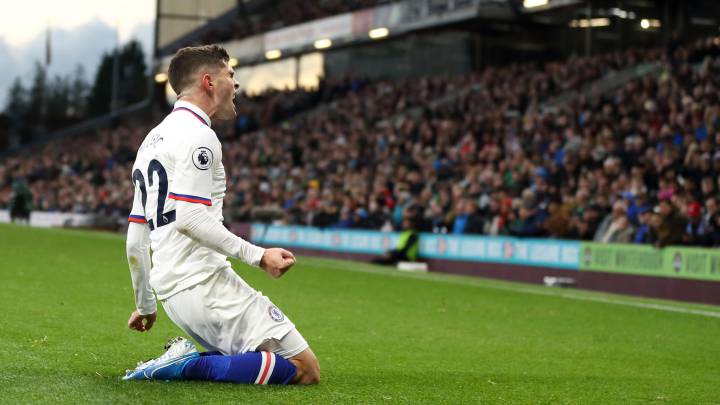 The USA international was sensational at Turf Moor and fully justified his inclusion in the starting XI having struggled for game time at Stamford Bridge thus far.

The Blues attacked with pace and purpose from the outset, capitalizing on every loose ball in the Burnley backline to devastating effect.

No player epitomized this better than the 21-year-old from Pennsylvania, who grabbed a perfect hat-trick to send a message to all those who doubted he could fill Eden Hazard’s shoes.

Of course, he has a long way to go, and late strikes by Jay Rodriguez and Dwight McNeil suggest Chelsea are on a steep learning curve also.

But it is likely to be an exciting journey for all involved at Stamford Bridge.

Pulisic made the most of his starting berth by boosting Chelsea ahead in the 21st minute.

The United States international capitalised on some indecision from the Clarets to dribble into the D and slot the ball beyond Nick Pope for his first Chelsea goal.

The former Borussia Dortmund winger doubled his tally for the Blues with a second goal just before half-time, roaming forward before finding the inside of a post to make it 2-0.

Pulisic completed his hat-trick – the first of his career – in the 55th minute, rising highest to get his head to Mason Mount’s cross from near the corner flag.

Willian got in on the act only minutes later as he cut in from the right, opened up some space with a step-over and left Pope sprawling for 4-0.

Chelsea was awarded a penalty and a chance to make it 5-0 when substitute Hudson-Odoi went down in the Burnley box in the 75th minute but, following a VAR review, the England teenager was instead booked for simulation and no spot-kick took place.

Jay Rodriguez provided some real consolation for Burnley with a rocket of a finish to make it 4-1 in the 86th minute.

Remarkably, the Clarets then further reduced the deficit as Dwight McNeil fired past a static Kepa Arrizabalaga as the Chelsea defence appeared to switch off.

No convincing Clarets comeback materialised, though, and Chelsea were able to celebrate a seventh straight win in all competitions as it ended 4-2 in their favour at Turf Moor.