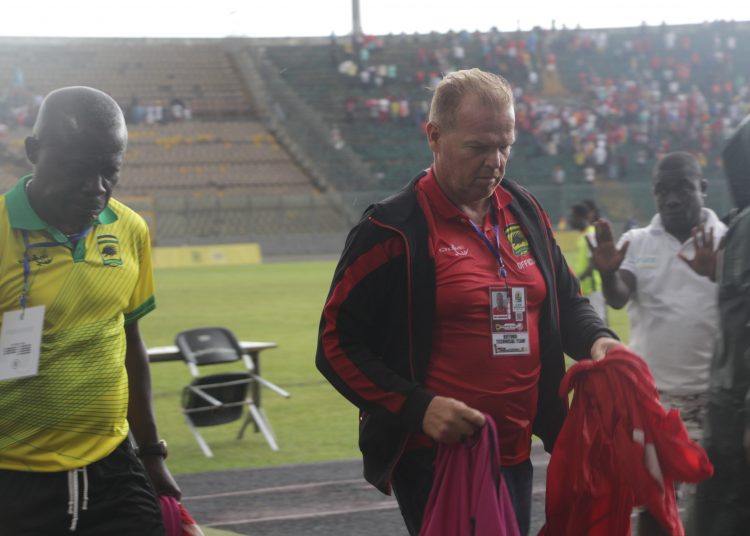 Kumasi Asante Kotoko’s CAF Confederation Cup last round qualifier against Ivorians FC San Pedro, has been called off, after downpour rendered the pitch waterlogged and unplayable.

The game was level at 0-0 after the first 45 minutes. But when the players re-emerged for the second half, the rains, which had been falling from the start of the game, had rendered parts of the Baba Yara Stadium pitched soggy, forcing officials to call off the game.

Game will continue on Monday from minute 45 as per the Confederation of African Football competition rules with the score at 0-0.

Players had initially come out for the start of the second half before they were recalled into the dressing to wait out the incessant rains.

But after 15 minutes, the South African officials, led by center referee, Eugine Nkosinathi Mdlule, came out and kicked the ball around, presumably to check the mobility of the ball in the conditions.

One goalpost was particularly in worse condition than the rest, and there was a suggestion to drain the water for the game to continue.

San Pedro players brought out ice coolers to help with the draining, Kotoko officials and players were seemingly unimpressed with the gesture, protested and a scuffle ensued, forcing security men onto the pitch to calm tempers.

The referee subsequently called off the game.

The first half was characterized by fantastic goalkeeping from both teams and a flurry of missed opportunities especially on the part of Kumasi Asante Kotoko.

Richard Arthur was particularly guilty of wasting clearer opportunities, shooting over the bar once and putting a tame effort in the hands of Tra Tape when he should have tested him much better.

But Trape’s finest hour came just before the hour mark, clawing a Justice Blay header out and wide and it looked destined for the top corner.

Moments after that, San Pedro forced a double save out of Annan, who was desperate not to be outdone by his opposite number.

First, he acrobatically punched away a Christ Mbondi effort before showing bravery to keep out a clumsy goal line melee that eventually looked to be going in.

At half time, the game was a closely contested end to end affair.