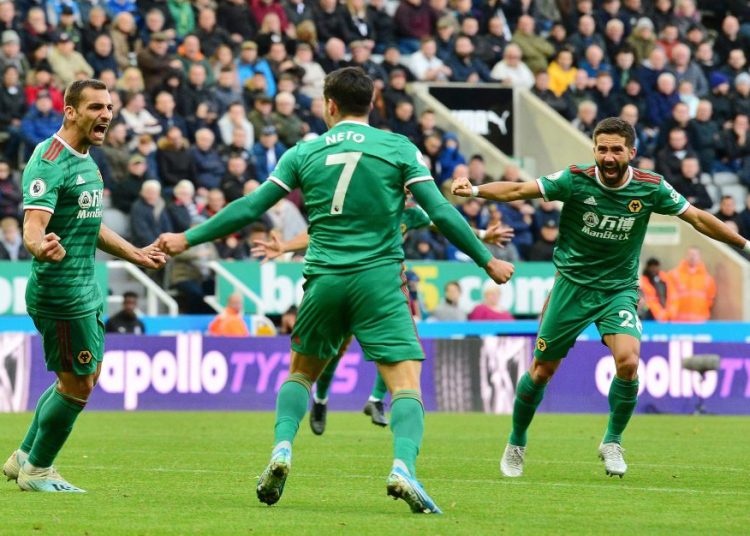 Newcastle were unable to take advantage of Wolves’ Europa League fatigue as the two sides played out a 1-1 draw at St James’ Park.

The clash got off to a slow start but the Magpies went a goal up just before half-time through Jamaal Lascelles’ bullet header.

However, Wolves shook off the cobwebs brought on by the trip to Slovakia after the break and caused their opponent’s problems.

And they got a deserved equalizer when full-back Jonny volleyed the ball into the net after capitalizing on a mistake from the usually dependable Newcastle goalkeeper Martin Dubravka.

Sean Longstaff was sent off for a high tackle on Ruben Neves on 82 minutes.

To say the start of the match was low key would be an understatement.

Both sides offered very little in terms of quality with the only notable moment inside the first 30 minutes a knock to Diogo Jota following a robust challenge from Federico Fernandez – the Newcastle defender perhaps lucky to escape a yellow card for his actions.

However, the game kicked into life on 34 minutes when Miguel Almiron – still searching for his first Newcastle goal in Newcastle colours since moving to the northeast in January – was put through on goal by Matty Longstaff.

But a heavy touch from the Paraguay international narrowed the angle for him and he poked the ball with his left foot into the side-netting.

Newcastle did have the lead moments later through – captain Lascelles powering home Fernandez’s inviting cross from the right beyond the reach of Rui Patricio.

Wolves did improve after the break and they asked more questions of their opponents with efforts from Jota and Adama Traore.

And they were level less than 20 minutes into the second half when Dubravka spilled Doherty’s cross straight into the path of the waiting Jonny, who made no mistake on the volley.

The older Longstaff brother, Sean, was given his marching orders for a very high challenge on Neves. It seemed like a genuine attempt to get the ball but referee Kevin Friend had no other choice but to show the red card.

From that point, Newcastle was happy to settle for a point but almost lost the game at the death but Doherty was just unable to direct a stoppage-time header in.