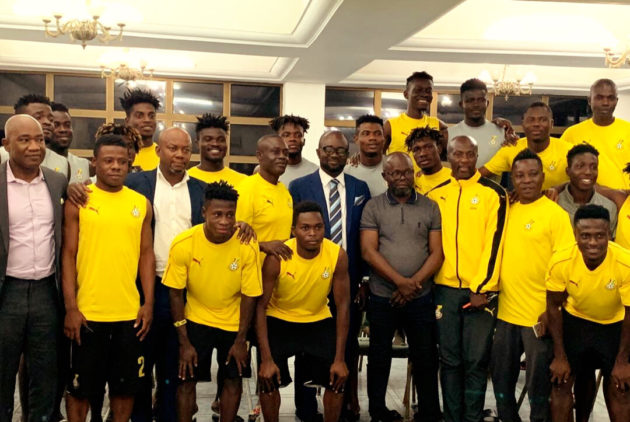 The newly elected President of the Ghana Football Association Kurt E.S. Okraku has called on players and technical team members of the Black Meteors at their camping base in Accra.

Accompanied by some members of the newly-formed Executive Council of the GFA, the FA President told the players that the visit was to reassure them of the unflinching support of the GFA and the football fraternity.

The national Olympic team has not played at the Olympic Games since 2004 in Athens, and the new GFA boss urged them to remain committed to the national cause and end the 15-year-old Olympics jinx.

“You have an opportunity to make history and make a man for yourself, your family and most importantly your country,” the GFA President told the Black Meteors.

Mr. Okraku adviced the players to remain focused on the task ahead, as well as heed the advice of their coaches.

Members of the Executive Council who accompanied the President; Messrs Mark Addo, Nana Oduro Sarfo, Samuel Anim Addo and Randy Abbey, also advised the players to remain focused on the task ahead.

Head Coach of the team, Ibrahim Tanko, on behalf of the technical team thanked the President and his delegation for visiting them.

“Your visit means a lot to us. This is your first official day in office and we are really happy and encouraged that you have remembered us with this visit.”

“We can assure you that we will go to Egypt and fight for the nation. We don’t want to just go and qualify; we want to go there and win the trophy for our country Ghana, in shaa Allah.”

The Vice Captain of the side, Kwame Baah, also thanked the President and his team and also assured them of the team’s commitment to the task ahead in Egypt.

The Black Meteors will take part in the African Under 23 Championship in Egypt for one of Africa’s three slots for the 2020 Olympic Games in Egypt. Ghana is in Group A with Egypt, Cameroon and Mali.