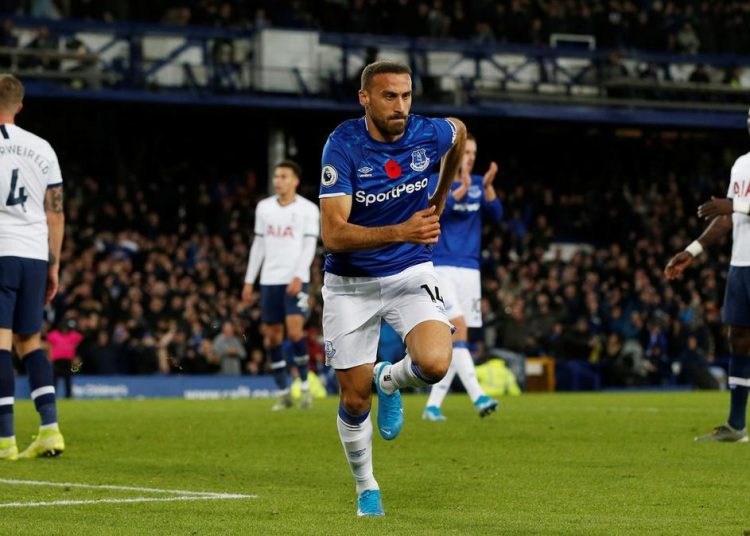 Everton substitutes Cenk Tosun’s equalizer seven minutes into stoppage time salvaged a 1-1 draw at home to Tottenham in a match overshadowed by a sickening injury to Andre Gomes.

Dele Alli’s first Premier League away goal since January looked like giving the visitors their first win on the road in 10 months until the Turkey international’s late intervention.

But the comeback was clouded by a terrible injury to Gomes in the second half which saw Son Heung-min initially yellow-carded before being shown a red by referee Martin Atkinson.

The Portugal international was caught by a late challenge but it was the way he fell awkwardly, as Serge Aurier closed in, which did the damage with his right ankle seemingly at right angles to his shin.

It only added to the sense that luck is deserting Everton as for the second successive week Marco Silva’s side seemed to fall foul of video assistant referee decisions.

But that will be of little consolation as just one win in seven league matches still leaves them 17th, just three points above the bottom three, with Tottenham up to 11th.

The absence of an ill Harry Kane should have been a huge boost to the Toffees as the England striker had scored two goals in each of his last four appearances against them.

However, Silva’s 4-1-4-1 set-up, with Fabian Delph as the defensive screen and Richarlison the lone frontman, looked like he was more concerned with not getting exposed, retreating 10 yards into their own half with nine and sometimes 10 outfield players behind the ball.

Apart from a couple of Richarlison shots on the turn – one at Paulo Gazzaniga and one over, both after turning Davinson Sanchez – was all they had to show for their first-half efforts.

Spurs were also below-par as they dominated possession but had half the number of shots as the Toffees.

Neither side forced a corner until the 24th minute, but when Spurs did it almost produced a goal.

The ball was recycled to right-back Aurier and his cross almost caught out Jordan Pickford, on his 100th Everton appearance, who clawed it away from under his crossbar.

It was a first-half devoid of chances and ambition, symptomatic of the poor form of the two teams.

Pochettino was first to make a tactical tweak for the second half by trying to Son closer to a goal by moving him into the centre-forward role and switching Kane’s replacement Lucas Moura out to the right.

The impact was almost immediate as the South Korea international went down under a challenge from Yerry Mina in which, after a long referral, VAR backed referee Atkinson’s decision not to award a penalty.

On the hour Richarlison felt he should have a penalty for a challenge by Sanchez, with whom he had a match-long tussle and came off second-best, but subsequently picked himself up to test the diving Gazzaniga from Everton’s very next attack.

The pressure was building with both teams anxious not to make an error and Alex Iwobi was the unfortunate culprit in the 63rd minute – his errant pass going straight to Son who slipped in Alli to beat Pickford.

Then Alli was almost the villain when the ball appeared to hit his arm as he challenged Mina, who may have been deemed to have impeded the midfielder.

Another inevitable lengthy VAR decision ruled there was no penalty to be awarded and Goodison Park howled its disapproval, with the Gwladys Street End producing a particularly offensive chant about the process.

However, a somber silence descended on the ground in the wake of Gomes’ injury, with Son in tears as he walked off down the tunnel.

A lengthy delay as Gomes was treated and stretchered from the pitch had an understandable deflating effect on proceedings until Tosun headed home.