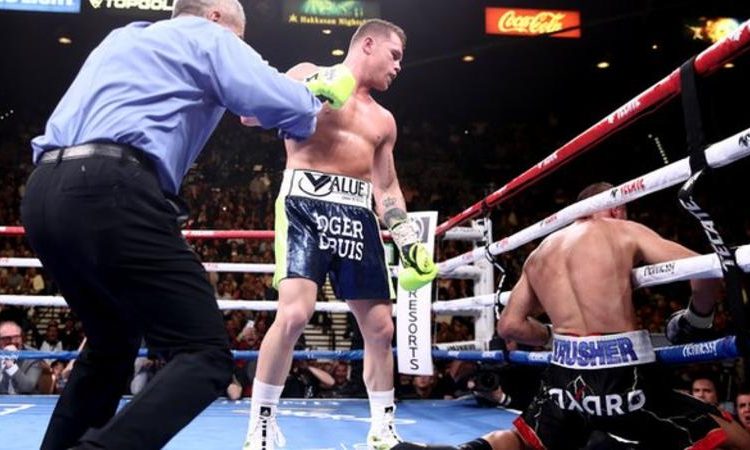 Saul 'Canelo' Alvarez has lost just once in 56 fights and now has titles at four weights (Image credit: Getty Images)

It proved a close fight which failed to ignite before an explosive combination from Canelo ended Kovalev’s night.

A cagey encounter at the MGM Grand appeared to be heading to a 12th round and one for the judges to decide before a left hook-right hand combination came from nowhere and left Kovalev floundering on the ropes.

Judges had Canelo slightly ahead at that point on their scorecards.

“The plan was patience, to have patience,” Canelo said. “We knew it would take time for me to get to him. I am new at this division, but overall it was successful.”

Canelo, the best-paid fighter in the sport, said winning a title at a fourth weight was an attempt to further enhance his reputation in his boxing-obsessed homeland.

“This is just one step in my history,” he said. “Be patient because Canelo will make history. It’s a guarantee.”

He started his career at 139lbs when he boxed as a 15-year-old on debut in 2005 and had won world titles at light-middleweight, middleweight and super-middleweight before this latest victory.

Kovalev was a tough opponent in what was his 16th consecutive world title fight, a run which started when he dismantled Briton Nathan Cleverly in Cardiff in 2013.

But the victory means Canelo still has just one defeat in 56 fights – against Floyd Mayweather in 2013.

Following the fight Canelo was also asked about who he could face next – a third fight against former middleweight rival Gennady Golovkin has long been mooted.

“We’ve fought 24 rounds and I beat him. It’s really not a challenge for me, but if it represents business, why not?,” he added.