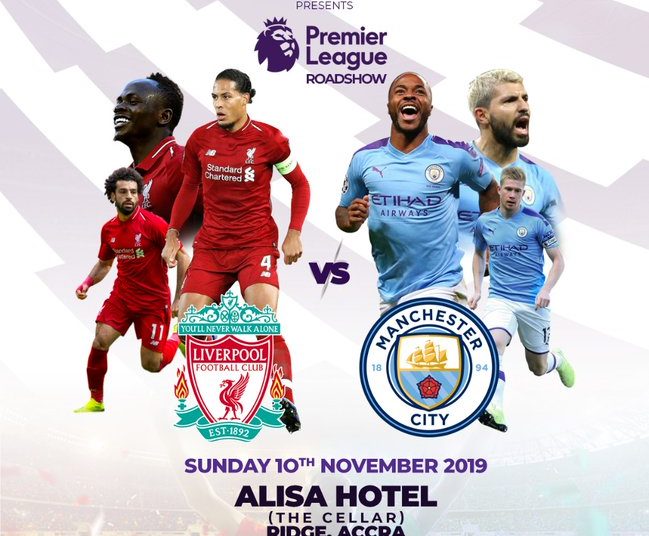 All roads lead to the Alisa Hotel on Sunday November 10, 2019, for another installment of the Citi FM Premier League Roadshow.

The match on the menu? A tantalizing match up between last year’s champions Manchester City, and the team they snatched the title from, Liverpool.

The Match – Liverpool vs Man City

It’s a slug-fest, a new rivalry that at times has the potential to spill over. But it’s has been a welcome animosity between two teams with insatiable appetite for winning; between two managers that are idiosyncratic in many ways, yet parallel in their idea of football.

Jurgen Klopp’s Liverpool host Pep Guardiola’s Manchester City in what many are already describing as a potential title decider.

It might seem crazy to think a match in the 12th round of a 38-game season will be swinging the title in any team’s favor. But close examination of the dynamics will lead you to believe it certainly will play a crucial part.

Liverpool are already 6 points above City, and a win at Anfield will extend that to 9 points, a seemingly insurmountable gap for even Guardiola’s nerve-wracking team.

Add the psychological urge that would give the Reds, and Liverpool would have reason to believe this might finally be the year they end their 30 year league title drought.

A City victory will close the gap at the top to 3, make Liverpool doubt themselves and give Guardiola’s men the mental urge.

The stakes are high, the margin for error, zero.

It does not matter whether you support either of these teams, if you are a football fan, this is a game that will have you on tenterhooks throughout the 90 minutes.

This is why you need to be at the Alisa Hotel on Sunday, after all, football they say, is fun when you watch with friends.

As has often been the case, bookmaking giants, Betway, who have been Citi FM’s partners in delivering the Premier League to Ghanaians in the past 3 years, are offering an opportunity to test you might on unbeatable odds on this explosive fixture.

The odds are incredibly even, with a Liverpool win pegged at 2.60 odds and a Man City win coming in at 2.61 odds.

The odds for a draw is at 3.56 odds, and while that looks inviting, it may actually be the likely outcome.

Last season, Pep Guardiola’s men, having been hammered the season prior but Liverpool’s gung-ho style football, played a cautious game at Anfield in which they gave nothing away defensively to earn a draw.

In fact, but for Riyad Mahrez’s missed penalty late on, City could have walked away with all the 3 points.

The feeling is that Pep would have been satisfied with how that particular game unfolded and will be deploying a similar tactic on Sunday.

If that happens, a draw is your sure bet.

Win a replica jersey from Betway

Betway is giving away an official West Ham jersey to a lucky fan at Alisa Hotel at the Roadshow.

To win, just show up at the roadshow, predict the score of the game before the game starts and you could be walking away with the shirt.

Good luck to all and see you on Sunday.