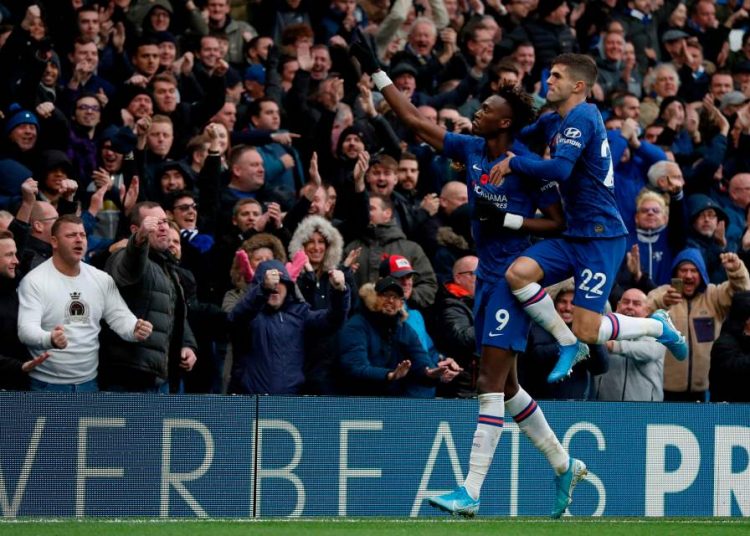 Tammy Abraham and Christian Pulisic continued their fine goalscoring form as Chelsea battled to a 2-0 victory over Crystal Palace at Stamford Bridge.

The England striker made it ten goals for the season, the joint highest in the league, after latching onto Willian’s clever flick to break the deadlock in the 52nd minute.

Then Pulisic bagged his fifth goal in three games, and his second header, to secure a sixth straight league win for Frank Lampard’s kids.

It sees Chelsea climb above Leicester and Manchester City into second ahead of their games against Arsenal and Liverpool respectively.

Stamford Bridge didn’t quite witness the drama of four nights ago, but the fighting spirit from that crazy 4-4 draw with Ajax was clear to see as Palace proved stubborn.

The hero from that night, 19-year-old right-back Reece James, started this one as Lampard named the youngest ever Chelsea team in Premier League history with an average age of 24 years and 88 days.

Despite first-half domination and flashes of brilliance from Pulisic, Chelsea struggled to break the visitors down and there were fears inside Stamford Bridge that their fabulous winning run could be ended this afternoon.

But then the two best players on the pitch, Mateo Kovacic and Willian, combined beautifully set up Tammy Abraham, who just about stayed onside to level with Jamie Vardy at the top of the Premier League’s goalscoring charts.

The goal injected an immediate sense of urgency into the Eagles, who suddenly began attacking with purpose, and they should’ve been level when James Tomkins spurned a glorious chance from a set-piece.

But just when the game looked like it was heading for a tense finish, Pulisic ended any hopes of a Palace comeback by latching onto Michy Batshuayi’s deflected shot and heading home in the 79th minute.

The Blues now find themselves five points behind Liverpool, who welcome Manchester City to Anfield on Sunday.