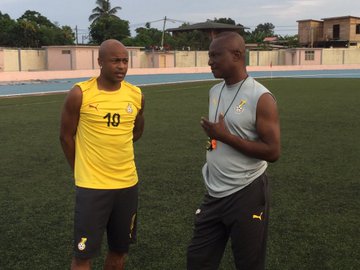 Black Stars players were involved in a training session at the Stade Nacional 12 de Julho in Sao Tome on Sunday evening ahead of their AFCON 2021 Qualifier against the home side.

The Stars were supervised by Kwesi Appiah and C.K. Akonnor as they went through sessions to help get them in shape after their flight from Accra.

The session was also designed to help the team get used to the artificial playing surface at the stadium. Alreeady, Black Stars midfielder, Thomas Partey, has stated that the surface will pose a few challenges since that is not what the players are used to.

The match will be played on Monday at 1pm Ghana time.

AFCON 2021 Qualifiers: “I will take pictures with pitch invader if possible” – Thomas Partey