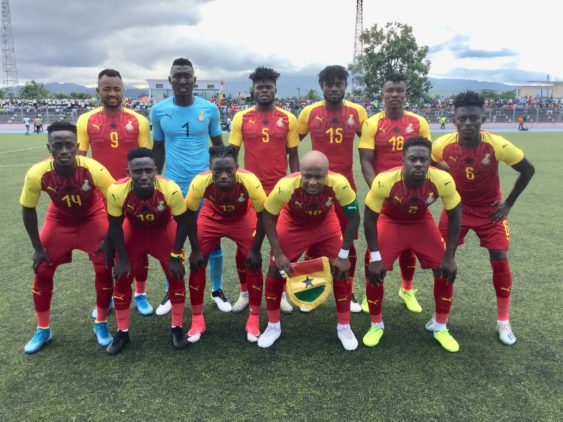 Ghana’s Black Stars picked up their second win from two games on Monday against São Tomé and Príncipe.

Jordan Ayew’s second-half penalty after Emmanuel Boateng had been brought down by the Sao Tome goalkeeper gave the Stars a 1-0 win.

The result takes them to six points in Group C, three clear of both Sudan and South Africa.

While the scoreline was less comfortable that the game against South Africa, the Black Stars were hardly ever in danger of conceding.

Here’s how the Black Stars players rated out of 10 today.

Ofori did not have much to do in goal. However, when he called up to claim a ball in the air, he was up to the task.

Decent defensively, Yiadom was a livewire going forward. Put in a couple of decent crosses and had a powerful shot parried clear by the keeper

Having been criticised by some fans against South Africa, Mensah stepped up on his second appearance for the Black Stars. His enterprising play down the left created a lot of chances for the Stars and his crosses were just begging to be prodded home.

Had some shaky moments but was strong when it mattered.

Both centre backs went through the game mostly untested but Nuhu was particularly attentive when called upon.

The captain saw a lot of the ball on Monday but struggled to create any significant opportunities. The one time he was put through, his ball back across goal was weak and was cut out.

Thomas Partey’s passing wasn’t at its usual flowing best due to the nature of the pitch but he was still a formidable presence in midfield, making tackles and interceptions. Going forward, Partey was a danger as well and looked like the likeliest Black Stars player to break the deadlock before the penalty.

A quiet but still effective game for the young midfielder. Just like Partey, his passing was suspect at times but that was again due more to the quality of the pitch than anything else. He appears to have cemented his spot in that midfield alongside Partey, at least for now.

Owusu came in as Ghana’s wide option following a very narrow Black Stars setup against South Africa. Despite some promising early moments, Owusu never really met the expectations that came with his inclusion in the lineup.

Another player who was criticised for an average game against South Africa, Boateng responded to the criticism with a fine performance on Monday. He put himself about in the first half and should have won a penalty. In the second half, his persistence did get him a penalty. He slowed down as the half wore on but the 64 minutes he played were certainly an improvement over last Thursday.

Jordan Ayew scored Ghana’s only goal in the second half but he probably should have scored earlier in the game after being gifted the ball by the Sao Tome keeper. He inexplicably chose to pass to Samuel Owusu and the chance was missed. He was a constant threat, however, winning free-kicks in dangerous positions. He was soon targetted by the defenders whose tackles became less and less controlled. However, Jordan will be pleased with his shift in a largely frustrating game for his side.