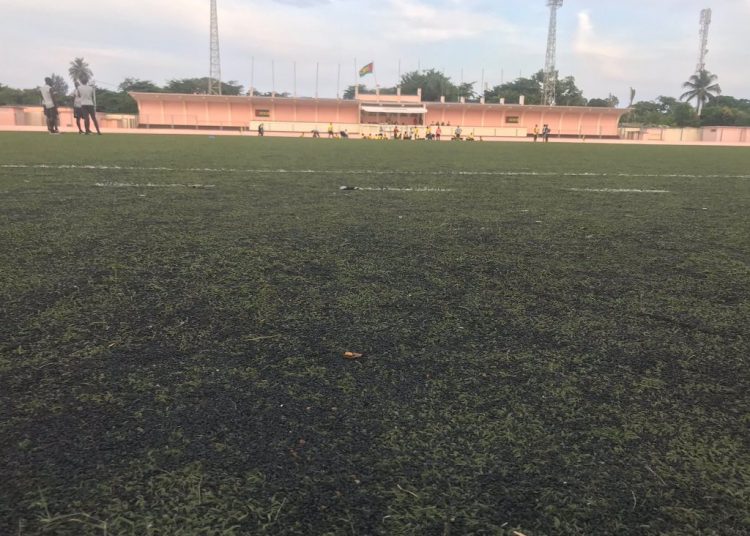 The main talking point ahead of Ghana’s encounter with São Tomé and Príncipe was definitely the astroturf.

It was also the main talking point of a largely forgettable game.

Black Stars coach Kwesi Appiah and midfielder Thomas Partey had expressed reservations about the pitch before the game.

And If anyone thought they were exaggerating or though they were looking for excuses should they not beat the massive underdogs, those feelings disappeared once the players took to the pitch.

Once the match kicked off, it was clear the pitch, perhaps more than their actual opponents, would be a massive hindrance to the Black Stars’ play.

Both sides struggled to string more than two passes together for much of that first half.

Given that Sao Tome were willing to sit back, give up possession and defend, they wouldn’t have minded not being able to pass the ball.

The Black Stars, however, dominated possession – 78% of it in the first half – and would have hoped for a better pitch to move the ball around on.

A number of the Stars’ more reliable passers had an off day as they struggled to find their men.

Ghanaians watching the match on TV noticed this and didn’t waste time complaining about it on Twitter.

This São Tomé pitch deɛ kai, What a terrible pitch.

So @CAF_Online inspectors actually took a look at this Sao Tome and Principe pitch and passed to host an Afcon qualifier? #AFCON2021Q

Learned that that’s the only stadium available in São Tomé & Principe but my question is do they have Clubs that play league games?

I can count the number of supporters inside the National Stadium of Sao Tome. They are about 400, i’m sure. And as the for the pitch, @datfifalady1 your backyard tomato 🍅 garden is even better. Lmao.

Some were also less than impressed with the attendance at the game.

A whole Black Stars have come to your country to play football with you and see the attendance!