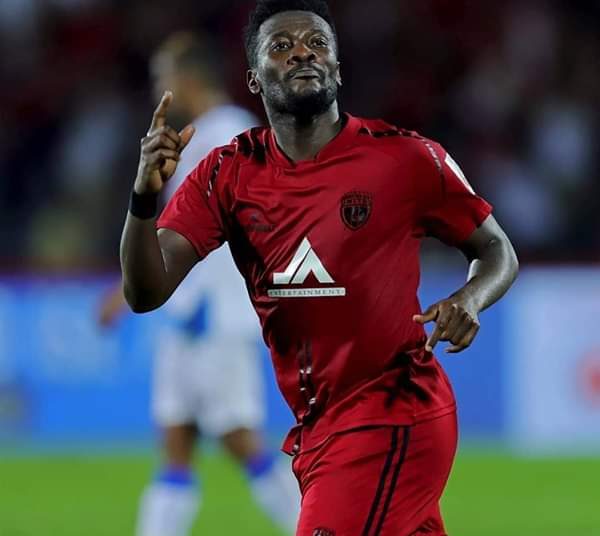 Aside from the great number of goals ‘Baby Jet’ has scored for the Black Stars, the penalty miss against Uruguay in the 2010 FIFA World Cup is perhaps the most iconic moment of his career.

I cried when Asamoah Gyan scored that WC goal against Germany 🇩🇪! The negativity around him was too much then he shut everybody up ! Happy birthday @ASAMOAH_GYAN3 #Monko #Gunit

Asamoah Gyan would’ve undoubtedly be the second biggest National hero we’ve had behind Nkrumah if that pen at the death vs Uruguay had gone in but damn. How a split second decision can make or break you. Anyway happy birthday @ASAMOAH_GYAN3 champ.

The prolific goal poacher started his professional career at Liberty Professionals where he bagged 10 goals in 16 appearances.

He moved to Udinese in 2003 he where he made a name for himself by netting 11 goals in 39 appearances.

The Ghanaian international got a big move to the English Premier League where he joined Sunderland after stints at the French club, Rennes.

After two years at the club, he moved to Al Ain in the United Arab Emirates on loan, before making the move permanent. He bagged 95 goals in 83 appearances.

He transitioned on to China, joining top giants, Shanghai SIPG.

Gyan now plays for Indian club, NorthEast United where he has netted 6 goals in the new season.

The prolific goal machine is Ghana’s leading goal scorer for the senior national team, Black Stars with 51 goals and is Africa’s leading goal poacher in the FIFA World Cup with 6 goals in 3 appearances.

He won the BBC African Footballer of the Year in 2010 after leading Ghana to the quarter-finals of the World Cup.

He is a boxing promoter and owns an airline company, Baby Jet Airlines.

Asamoah Gyan is a music lover and has been involved in several collaborations as well as releasing some songs.

A big happy birthday to a leader, legend and humanitarian advocate, Asamoah Gyan.

Happy birthday to the General Captain of the Black Stars, Asamoah Gyan. I wish you long life and prosperity 🥳🥳🥳 pic.twitter.com/UgG47k0xvp

Happy birthday Asamoah Gyan more Grace and strength , u will always be my captain . God bless you

Happy birthday to one of the greatest to have done it. A true legend of our game.
Asamoah Gyan. pic.twitter.com/Tf1gb87tZu

A King is +1 today. Happy birthday Legendary @ASAMOAH_GYAN3. May the God Almighty continue to bless you and your generations. Enjoy your day King Asamoah Gyan. pic.twitter.com/OcY0lvEGgn

“I’m coming out of retirement in 2020” – Floyd Mayweather

"I'm coming out of retirement in 2020" - Floyd Mayweather