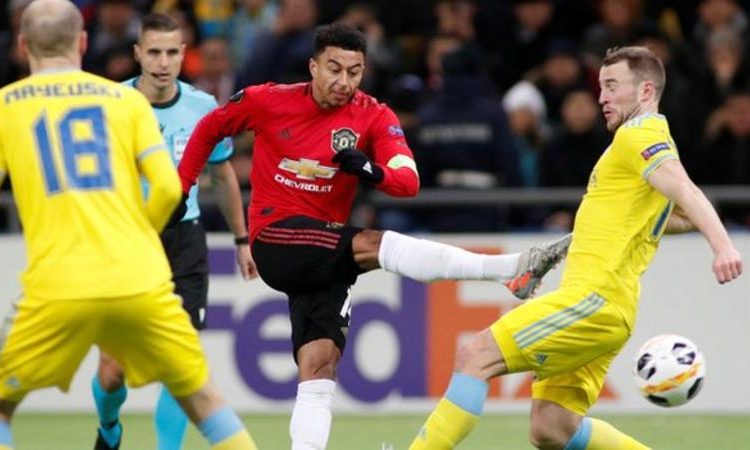 Jesse Lingard scored just his second goal of 2019 for Manchester United, and his first in 29 appearances in all competitions since netting against Arsenal in the FA Cup in January, 307 days ago (Image credit: Reuters)

Manchester United’s youngsters were taught a tough lesson as Astana came from a goal down to inflict the English side’s first defeat in Europa League Group L.

With the visitors having already qualified for the last 32, manager Ole Gunnar Solskjaer spared his senior players the 6,000-mile round-trip to Kazakhstan, took a squad packed with academy graduates and chose an XI with an average age of 22 years and 26 days – the youngest fielded in European competition.

Jesse Lingard, the eldest of the outfield players at 26 and captain for the night, gave United a 10th-minute lead when his deflected low strike found Nenad Eric’s bottom left corner. It ended a goal drought dating back to January.

Tahith Chong should have made it 2-0 after the break, but astonishingly scooped over from six yards with an empty net in front of him. Seconds later United conceded their first goal of the group stage when Dmitriy Shomko’s deflected drive beat the reach of Lee Grant.

The six-time Kazakh champions delivered another blow shortly afterwards when Antonio Rukavina’s cross went in off the body of Di’Shon Bernard.

United responded positively with Eric producing two fantastic saves to deny Angel Gomes and Mason Greenwood, but they failed to prevent the Kazakh champions from recording their first group win of the season.

The Premier League side host Dutch club AZ Alkmaar in their final match on 12 December.