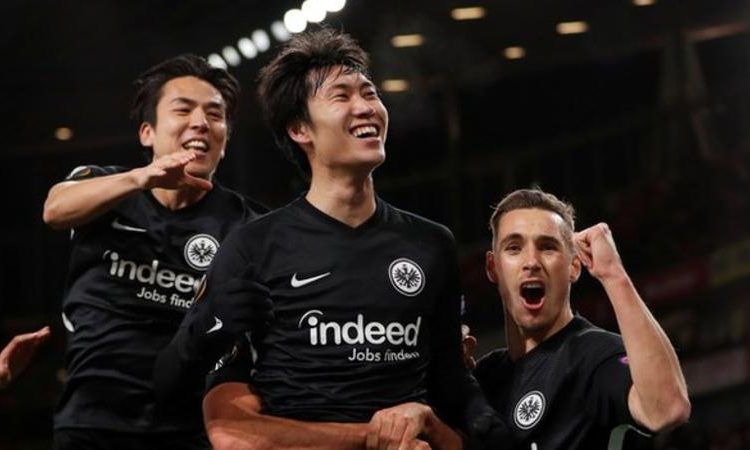 The Gunners boss came into this Europa League match having failed to lead his team to victory in their previous six outings, and this latest defeat means this is their longest winless run since February 1992.

At full-time the Spaniard appeared to make a gesture to the sparse home support as they jeered him, with some holding ‘Emery Out’ posters having watched their side surrender control against a team who were a clear second best in the first period.

However, Arsenal will seal qualification for the last 32 if they avoid a heavy defeat at Standard Liege in their final Group F game.

It looked like the Gunners had turned the corner after they dominated the opening period. Eintracht spent most of it trying to keep Arsenal’s attack at bay until Pierre-Emerick Aubameyang made the breakthrough with a strike just before half-time.

The Bundesliga side only managed one shot on goal in the first half, but were transformed after the break and equalised when Kamada curled in a fierce effort from the edge of the box.

The 23-year-old Japan international then put his side in front with another sweet strike from the edge of the area.

The contest also marked the return of Granit Xhaka to the Arsenal XI. The Swiss midfielder had missed the Gunners’ past five matches after his infamous substitution in the 2-2 draw against Crystal Palace at the end of October, when he angrily gestured to supporters.

The 27-year-old appeared to pick up a knock to the knee in the first half but following treatment played the full 90 minutes.