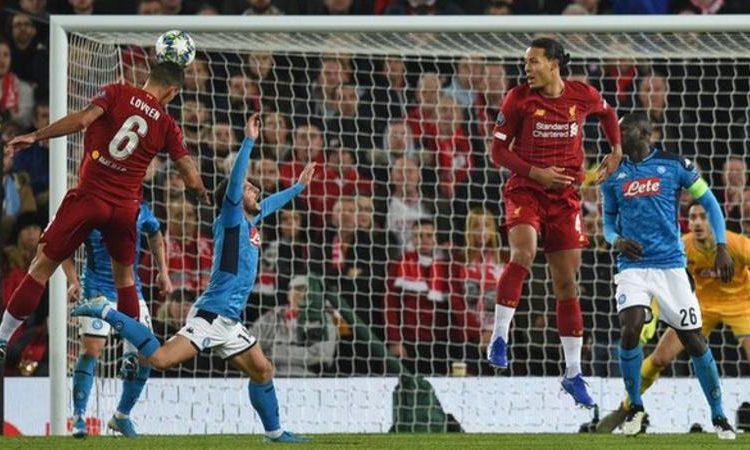 Dejan Lovren scored his first goal in Europe since claiming the winner in the Europa League quarter-final against Borussia Dortmund in April 2016 (Image credit: AFP)

Defending champions Liverpool will need at least a point in their final group game at Red Bull Salzburg to guarantee reaching the last 16 of the Champions League after a lacklustre draw against Napoli.

The Reds would have gone through as Group E winners with a win but fell behind midway through the first half when Dries Mertens beat the offside trap to finish from a tight angle.

Liverpool were far from their best in the first half as they struggled to put together the fast-flowing attacking football they are capable of, although went close to equalising on the stroke of half-time when James Milner was denied at the near post.

Kalidou Koulibaly cleared Roberto Firmino’s effort off the line as Liverpool improved after the restart, with Napoli sitting deeper to protect their lead.

The hosts finally equalised when Dejan Lovren headed home from a corner after 65 minutes, the goal prompting Anfield to roar into life as Liverpool fans urged their side on to find a winner.

But despite a late push the Napoli defence held firm to earn a point.

It means Liverpool will have to go to Red Bull Salzburg on 10 December needing a draw or hope Napoli lose at home to Genk.

Off-colour Reds left with work to do

With 11 wins and two draws in their previous 13 games, it had seemed before kick-off that this would be a straightforward night for the Reds.

They hadn’t lost at home since a League Cup defeat by Chelsea in September 2018, while Napoli arrived at Anfield a side in disarray, with off-pitch unrest coupled with a run of six games without victory.

But the Italians have been a thorn in Liverpool’s side in recent years. They had won two of their three previous Champions League meetings, and were only an Alisson save away from ending the Reds’ title-winning campaign at the group stage last season.

A bright first five minutes proved to be a false dawn as Liverpool struggled to get a foothold in midfield, while their normally deadly front three of Mohamed Salah, Firmino and Sadio Mane could not link up effectively to carve open a disciplined Napoli defence.

Liverpool have finished strongly in recent weeks to get wins against Tottenham, Aston Villa and Crystal Palace but even after Lovren’s equaliser there was never really a sense that they would go on and finish the job.

It was an off day for Liverpool but the draw does keep their unbeaten run going and the performance will provide manager Jurgen Klopp with an indication of what needs improving ahead of a busy December.