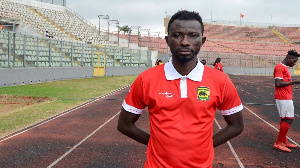 Jordan Opoku, Augustine Sefah have officially left Asante Kotoko after their stay at the club was not extended just a few weeks to the start of the new Ghana Premier League season.

The decision was confirmed by high-ranking Kotoko official and Nana Gyambibi Coker, in an interview with Light FM on Sunday.

“We have officially parted ways with three of our players namely Kwame Boahene, Augustine Sefah and Jordan Opoku.”

The three players had been part of the Kotoko set up under former coach, Kjetil Zachariassen. Their exit follows the recent trend of the team not extending the contracts of some players.

Boahene joined Kotoko from Medeama for a fee of GHS 95,000 while Sefah and Opoku were brought in on free transfers in 2017.