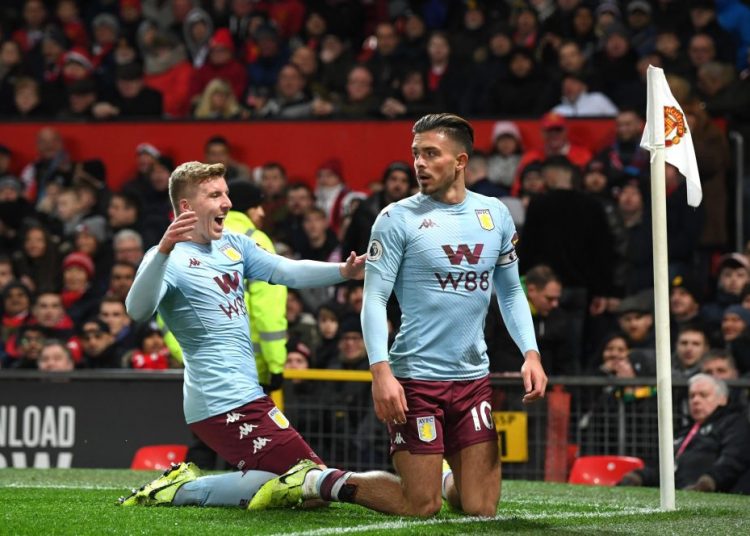 Manchester United squandered the chance to move into Champions League contention after being held to a 2-2 home draw by Aston Villa.

For a substantial period in the first half the visitors, who had lost 16 of their last 17 matches against established top-six opponents, controlled proceedings with a game plan centred around the influential Jack Grealish.

Villa’s captain scored the opener and presented all manner of problems before Marcus Rashford forced an own goal from goalkeeper Tom Heaton minutes before the interval.

When Victor Lindelof put United ahead midway through the second half, coming from behind to take the lead for the second successive Premier League match, that should have been the signal for them to see out the game.

But, just like last weekend at Sheffield United, Ole Gunnar Solskjaer’s side conceded an equaliser, with Tyrone Mings volleying home just four minutes later as they lost the initiative.

So instead of reaching their highest position since mid-September, which would have put them within six points of Chelsea, United had to settle for a point which lifted them into ninth.

In truth they did not deserve victory, which would have papered over the cracks of another directionless performance, as it was Grealish who stole the show by demonstrating the absolute best of his talents.

It was an effortless display from the Villa captain, particularly in the first half.

Everything he did was intelligent and instinctive, hanging out on the left and then drifting inside with purpose, intent and a genuine threat.

On the occasions when United’s players could get near him they could only foul but the goal he scored was brilliant in its execution, even if the apparent ease with which he skipped past Andreas Pereira was something of a concern.

Having collected an 11th-minute cross from Anwar El Ghazi, who injured himself in the process and took no further part, he cut back onto his right foot and curled a delightful shot over David De Gea and into the top corner.

The 24-year-old has now been directly involved in seven Premier League goals this season (three goals and four assists), the most of any English midfielder.

Even the loss of El Ghazi failed to halt Villa’s progress as his replacement Trezeguet forced the ball over the line in a goalmouth scramble – again created by Grealish – only for it to be chalked off by an offside flag which had gone up a considerable time earlier.

Rashford had been one of the few United bright spots of the first half, shooting at Heaton and then bundling a shot wide, as the forward line fed off scraps chasing long balls.

However, a striker with 10 goals in his previous 11 matches for club and country does not need many more chances and things become easier when opportunities come gift-wrapped.

Misjudgements from Mings, in delaying his clearance, and Heaton, having to concede a corner to avoid sliding out of the area with the ball in his hands, allowed Pereira to swing over a cross for Rashford’s header to hit the far post and go in off the goalkeeper.

United finally turned up for the second half with a weaving run from the previously anonymous Anthony Martial forcing Heaton into a reflex save, with Juan Mata’s penalty claim turned down in the same attack.

The game appeared to change in the space of 60 seconds as a sliding Grealish failed to properly connect with Trezeguet’s deflected pass at one end and Lindelof headed home Fred’s cross at the other.

But the lead lasted less than four minutes as Matt Targett’s chipped pass caught Brandon Williams hanging back as the United raced out defending a short free-kick and Mings, along with Trezeguet, was left alone to volley past De Gea.

Martial somehow scooped over from three yards but their momentum had been interrupted and there was no recovering it.