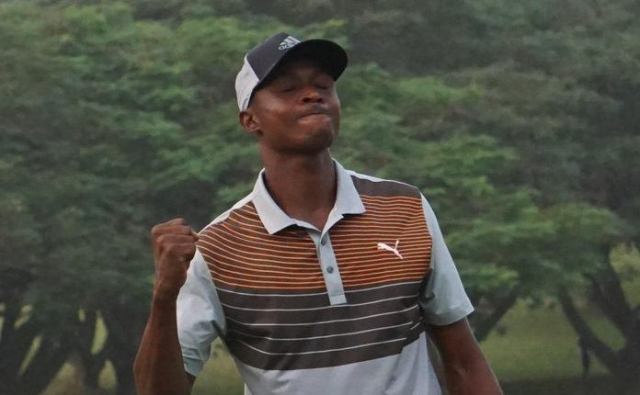 Vincent Torgah has been thrown out of this year’s Gold Fields PGA Championship after  breaking local golf course rules on Day 2 of competition.

The disqualification of the two-time winner of the event was announced by the PGA Tournament Director Akwesi Prempeh after the second round of play on Thursday which ended with Torgah in a one shot lead.

Torgah, named Golfer of the Year by the Sportswriters Association of Ghana (SWAG) in 2017, was sent packing after being reported by his two playing partners for infringing the Ground Under Repair (GUR) rule at hole 15 of the Damang Golf Course, Tarkwa.

According to the report brought by Samuel Tetteh, a scratch golfer from Tema playing to qualify to join the professional ranks and Kwabena Poku, of the Royal Golf Club, Torgah refused to add the required strokes to his score but went ahead to sign it.

Per local rules governing Damang golf course, if a golfer plays GUR without stroke and distance, he/she has to add two strokes to his/her score before signing the scorecard.

The Tema Country Golf Club man was top of the leader board with nine under (-9) course par after two rounds of play.

Nigerian Christopher Francis who was top of the standings after the opening round, replaced Torgah at the top after he scored 136 gross over two days.

Four shots behind the Nigerian is Zimbabwean Visitor Mapwanya (140) and leading the charge for the host country is Emos Korblah who has recorded a 142 gross.

Meanwhile, the playing field of sixty three (63) professional golfers from host Country Ghana, Nigeria, Togo, Cote D’Ivoire and Zimbabwe have been whittled down to thirty (30).

Two-time defending champion, Kojo Barnni is still in the hunt for an unlikely third consecutive victory. He is tied in 15th place with a 152 gross with Francis Torgah and Peter Amenyo.