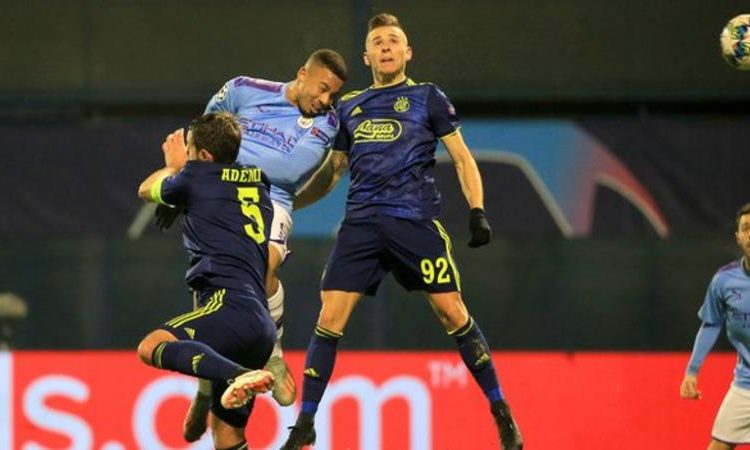 Manchester City forward Gabriel Jesus says he has to “keep scoring” after his hat-trick inspired the Blues to come from behind to win their final Champions League Group C game at Dinamo Zagreb.

The Brazil forward, 22, who is spearheading City’s attack with Sergio Aguero out injured, has now scored five goals in his last five starts for the club.

And his form is likely to be key for City, who are third in the Premier League, 14 points behind leaders Liverpool.

“Now the goals are coming so I’m so happy but I cannot stop – I have to keep scoring,” Jesus said.

“I have to do my job. My job is to score goals and help the team, without the ball and with the ball. Last month, I was not scoring and I felt so bad because I have to score and help my team-mates.”

City, who qualified prior to their trip to Croatia, finished top of Group C, with Atalanta qualifying in second after their 3-0 win at Shakhtar Donetsk.

Dani Olmo had opened the scoring for the hosts, with a sparkling volley from Damian Kadzior’s right-wing cross which found the top corner.

But Pep Guardiola’s side dominated possession throughout and levelled before the break, with Jesus heading a Riyad Mahrez cross into the top left corner.

Jesus then put City ahead early in the second half, placing an effort into the bottom right corner after a one-two with Phil Foden and some neat footwork.

The Brazil forward tapped Benjamin Mendy’s cross into an unguarded Dinamo goal four minutes later but he was then substituted. Foden rounded off a fine display from the visitors, prodding in Bernardo Silva’s cross, to give the score an emphatic feel.

City advance to the knockout stages unbeaten in the competition this term and will be one of the seeds in Monday’s last-16 draw.

Dinamo’s defeat, coupled with Atalanta’s victory, sees the Croatian champions finish bottom of the group to miss out on a place in the Europa League.