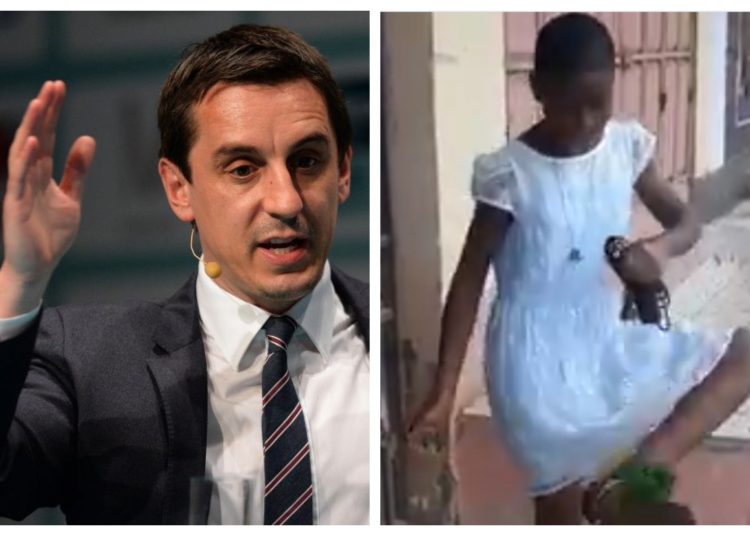 When Black Queens forward Samira Suleman posted a video of her kid sister doing keepy uppies on Twitter, she would definitely have been expecting a lot of attention.

However, even she would have to admit that the level of engagement since she first uploaded the video has been massive.

The video, originally posted on Saturday, currently has almost a thousand retweets and well over six thousand likes.

It features Suleman’s sister doing astonishing keepy uppies, a skill where a person keeps an object, usually a football, off the ground by constantly hitting it up in the air with their foot or any other part of their body.

And it’s not just in Ghana that the little starlet’s skills are getting lots of attention. Even Man United Legend and Sky Sports pundit, Gary Neville has taken notice.

He retweeted the original post, adding that he loved the video.

A number of people who saw the video reacted to it as well, mostly praising the girl.

A few others joked that she should improve a number of Premier League teams, including Arsenal’s beleaguered defence.

Very good…but can she do that at Stoke on a Wednesday night….howling wind….pissing down🤷‍♂️……I’m not so sure 😉

If she can track back Arsenal should sign her!

No tablet or device needed there …. the kids doing this sort of stuff always look so happy , very talented

No tablet or device needed there …. the kids doing this sort of stuff always look so happy , very talented

I can’t even walk properly in flip flops / sliders pmsl. Much respect 👌🏼