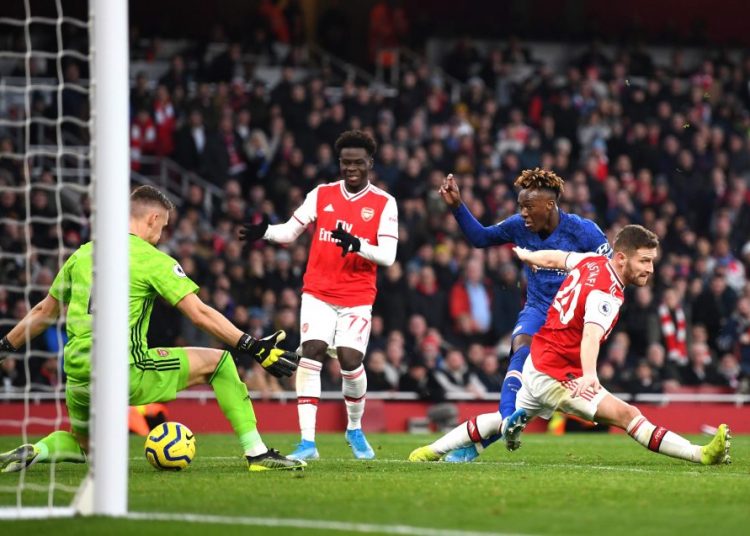 Chelsea completed a stunning late turnaround to beat Arsenal 2-1 despite being outplayed for much of the match.

And things went from bad to worse four minutes later as the Blues caught Arsenal on the break and snatched all three points thanks to a smart turn and finish from Tammy Abraham.

It seemed impossible after Chelsea were blown away by a resurgent Arsenal, who were electric inside the opening 30 minutes.

Pierre-Emerick Aubameyang stooped low to head the hosts in front on 13 minutes and the Gunners dominated for large parts of the game thereafter.

The Blues, who did improve after the break, were forced to change the system entirely and even introduce 19-year-old Tariq Lamptey for his first-team debut, making their victory all the more remarkable.

Frank Lampard will wonder how his side didn’t suffer a sixth defeat in eight matches, while Arteta will question how on earth he is winless in his opening two matches.

Arsenal ripped into a disorganised and disoriented Chelsea from the off.

The Gunners pulled the Blues apart at will, with Emerson particularly enduring a torrid time on the left.

That the home side took the lead came as no surprise. Chambers nodded a corner across goal and Emerson switched off entirely, allowing Aubameyang to ghost behind him and make it 1-0 after 13 minutes.

Both Arteta and his keeper had their heads in their hands from that clanger, but the misery was only just beginning.

Chelsea broke at pace, with Abraham and Willian linking up before the England striker conjured a decisive finish.