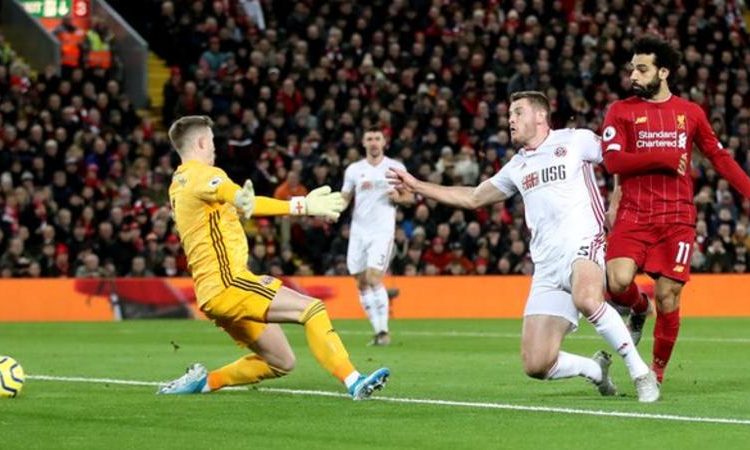 Mohamed Salah has scored against 22 of the 25 different Premier League opponents he has faced as a Liverpool player, only failing to register against Manchester United, Swansea and Aston Villa (Image credit: Getty Images)

Unbeaten Premier League leaders Liverpool made it a full year without losing in the top flight as Sheffield United were brushed aside at Anfield.

A slice of good fortune enabled the Reds to take an early lead – George Baldock’s slip allowing Andy Robertson to set up Mohamed Salah for a simple close-range finish in just the fourth minute.

But there was nothing fortuitous about their win, which Sadio Mane sealed, finishing at the second attempt after being played in by Salah.

It maintains the Reds’ 13-point advantage at the top of the division after nearest rivals Leicester and Manchester City both won on New Year’s Day.

Jurgen Klopp’s side have dropped just two points from a possible 60 this season.

For Chris Wilder’s side, this was a second successive defeat, but they remain firmly in credit from the first half of their league campaign and sit eighth in the table, just two points off fifth.

Liverpool’s 18th consecutive league win and 51st top-flight encounter without defeat in a row at Anfield was another showcase for a side working to near maximum capacity.

Despite Klopp labelling as “criminal” a festive fixture schedule that has seen his side play six games in 17 days, the German kept his team changes to a minimum.

He did have to make a late alteration, bringing James Milner in for the man he originally drafted in to the side, Naby Keita, who injured himself in the warm-up, but it made little discernable difference.

In fact, Milner was superb as one third of a brilliant midfield unit, along with Jordan Henderson and Georginio Wijnaldum.

Their work-rate, movement and accuracy of passing provided the platform, with Virgil van Dijk alert and efficient on the rare occasions Sheffield United were allowed a kick in the Liverpool half.

Salah scored one, but he would have had more but for the combination of some excellent reflex saves from Dean Henderson and the woodwork – the Egyptian’s chipped second-half cross floating past everyone and hitting the inside of the post.

Roberto Firmino went close to his first Anfield goal since March with a curling effort just past the post and should have got it later in the second half, but failed to connect with Trent Alexander-Arnold’s low cross from point-blank range.

In the end, though, two was more than enough to seal another win and move another step closer to their ultimate goal.

However, it would now take an implosion of unprecedented proportions to deny the Reds a first top-flight title in 30 years.