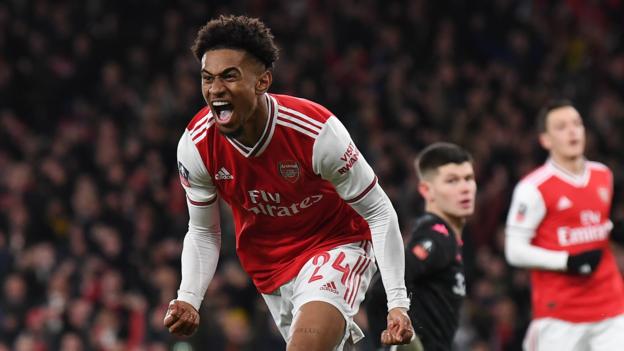 Arsenal manager Mikel Arteta “shouted a lot” at half-time to inspire an improved performance that helped the Gunners beat Leeds United and progress to the FA Cup fourth round.

Leeds dominated before the break, with Patrick Bamford hitting the bar with one of United’s 15 first-half efforts.

Arsenal were excellent in the second half and Reiss Nelson scrambled home to secure a second consecutive win.

The Gunners will visit Bournemouth in the next round later this month.

Arsenal keeper Emiliano Martinez said Arteta was “really angry” at the break and striker Alexandre Lacazette told BBC One: “The manager shouted a lot. He was not happy because we knew they’d play like this and we didn’t respect what he had said.”

The hosts had the majority of the second-half chances, with Lacazette clipping the crossbar with a free-kick.

“Now I’m really pleased but we saw two different teams – one in the first 30 minutes, and another after that,” said Arteta.

“I tried to tell them exactly what they were going to face and after 32 minutes we had won one duel, I think. We changed our attitude, desire and organisation at half-time and then we were completely different.

“Sometimes they have to experience themselves how tough and how hard it is going to be. I watched a lot of Leeds games and they battered every team every three days. It was good for my players to learn and to suffer on the pitch.”

Leeds boss Marcelo Bielsa will see the game as a missed opportunity for the Championship leaders – especially after their first-half performance – although he can now focus on promotion and ending the club’s 16-year absence from the top flight.