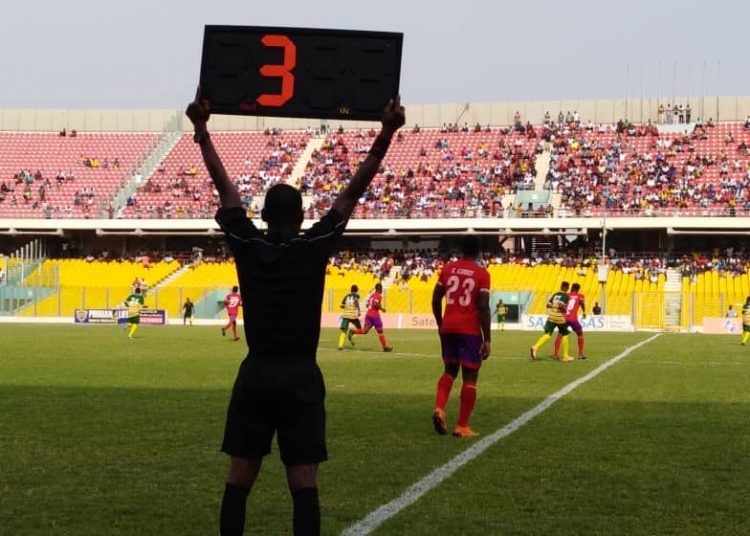 Accra Hearts of Oak recorded their first win of the 2019/2020 Ghana Premier League season with a 2-1 victory over Ebusua Dwarfs at the Accra Sports Stadium.

Joseph Esso and Kofi Kordzi converted two free-kicks in either half to hand Edward Odoom’s their first 3 points of the campaign, with Albert Ato Hammond grabbing the consolation for Dwarfs.

Hearts of Oak, in search of their first goal or win if the season, started strongly with Manaf Ibrahim and Joseph Esso spurning good opportunities to put the Phobians in the lead.

But with Ebusua Dwarfs offering very little going forward, Hearts of Oak, who had dominated the game, finally got the opening goal just after the half hour mark.

After Dwarfs conceded a free-kick on the edge of the area, Esso stepped up and curled a beautiful effort around the wall and into the back of the net.

Dwarfs coach Raymond Assibu responded by bringing on Isaac Donkor for Prince Kpodo and Donkor brought stability in the midfield.

The first half finished with Dwarfs much better, creating chances of their own but still lacking the cutting edge inside the box.

After recess, Hearts of Oak doubled their lead from another free-kick. This time, Kofi Kordzi who won the foul, stepped up and curled the ball into the top right corner of Razak Issah’s goal.

Issah then made a brilliant double save from Obeng Junior and Joseph Esso to keep his team in the game.

On 70th minute, Dwarfs pulled one back after a poor headed clearance from Robert Addo allowed Martin Tsiboah to slip the ball onto Albert Ato Hammond to chip over the on rushing Richard Attah.

Hearts went in search of a 3rd goal but Razak Issah showed great agility to limit the damage for Dwarfs who have now lost all 3 of their opening games of the league.

Hearts of Oak, after recording their first win, will now visit Wafa on Wednesday.