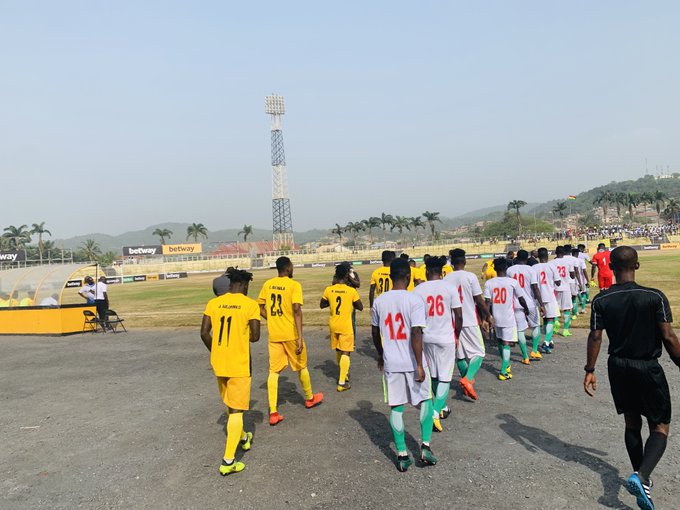 As the games come thick and fast, the good teams are getting distinguished from the average ones and those with title ambitions are sticking their necks out for a claim while the rest are getting drawn in slug-fest of mid-table pingpong..

Match week 3 of the Ghana Premier League concluded with Ashantigold and Aduana Stars, both sponsored by Betway, distinguishing themselves as the only two teams with a 100% record to the start of the league, concluding with 3 wins out of three.

The Miners are now joint top of the league with Medeama and will face their toughest test yet in midweek when Sharif Mambo’s men travel to Accra to take on a Legon Cities side desperate for points.

Both teams are out. Game starts in few minutes.#AshgoldWonders #Miners💛🖤💪 pic.twitter.com/4qsVVzTEu6

Yahaya Mohammed was the star man again as Aduana Stars made it 3 out of 3 with a fantastic brace to power the Ogya Boys to the top of the table with a 2-1 win over King Faisal.

Yahaya Mohammed has now scored 5 goals in three games and the defending champions are already laying down the marker on why they should not be ruled out.

Liberty have become something of draw masters, picking up 3 draws in their three games so far.

While the draw away in Bechem last weekend would have been a satisfying result, the 1-1 draw on Saturday at home to Medeama would hit with disappointment.

After Elvis Kyei Baffour fired the Scientific Soccer Lads in front in the 64th minute, it was disappointing in the end that David Ocloo’s men could not see out the result and are now left ruing a missed opportunity for the first 3 points of the season.

The moment Elvis Kyei-Baffour stepped up for the penalty pic.twitter.com/xNpxWHDroD