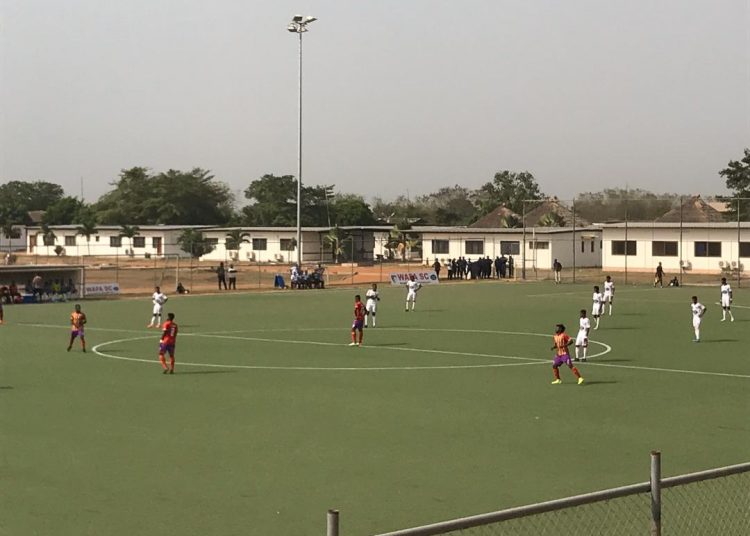 Accra Hearts of Oak secured their first point in 5 years at Sogakope-based Wafa, after playing out an exciting 0-0 draw in the Premier League on Wednesday afternoon.

Hearts of Oak head coach opted to hand Emmanuel Nettey a debut and his partnership with Benjamin Afutu and Frederick Ansah Botchway caused Wafa all kinds of problems in the first half.

Hearts dominated, created the better chances and controlled the game in the opening exchanges and limiting a usually dominant Wafa side to attacking from counter attacks.

Wafa goalkeeper, Ferdinand Sabi was made to work to keep his team in the game, collecting a long drive from Nettey before tipping over Botchway’s corner kick that looked destined to loop in.

The first half ended with Hearts of Oak the better side, assured and untroubled.

After the break, Hearts goalie, Richard Attah, pulled off an impossible save at full stretch to deny Forson Amankwah’s left footed free-kick that seemed destined for the top corner.

Not long after that, Kojo Obeng Junior was down the other end, released by Benjamin Afutu from a neat one-two and with Joseph Esso waiting unmarked in the area, Obeng Junior opted to shoot but his tame left-footed strike was calmly collected by Sabi.

As Wafa threw everything forward in search of a goal, Hearts of Oak embarked on a mission to starve them of the ball as much as possible.

Odoom took out striker Kofi Kordzi and brought in midfielder Nurudeen Abdul for his debut.

Daniel Owusu’s weak shot into the waiting arks of Attah had everyone at the Wafa Park gasping for air in disbelief.

That was the last significant action as referee Alphonso Atiapaj brought proceedings to an end. Hearts of Oak had secured their first point at Wafa for the first time in 5 seasons.