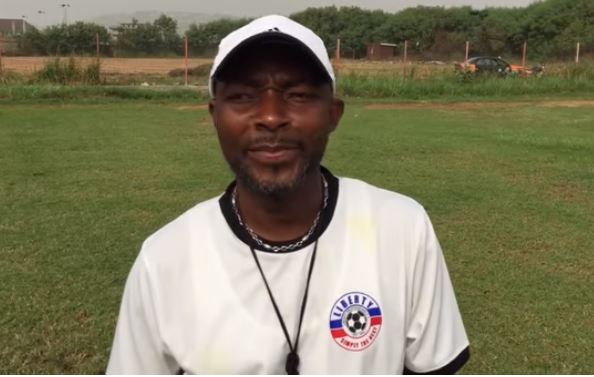 Liberty Professionals will have to find a new head coach for their team after David Ocloo quit his job on Tuesday.

Sources close to the club say that the coach informed the club of his decision on Tuesday two days after the team lost 2-1 to Accra Hearts of Oak in the Ghana Premier League.

Ocloo was brought in to replace Reginald Asante who had to go and further his coaching education and get the required paperwork to coach in the league.

His resignation letter which he sent to the club read:

”Through this letter, I hereby announce my resignation from the position of Head coach for Liberty Professionals effective 20th January, 2020.

”It has been a pleasure working with you and the entire Liberty Professionals team for the past one and half month. In my time here, I have grown professionally and made life-long friends.

You have my full commitment and cooperation for a smooth transition of responsibilities.

”I wish you  and Liberty Professionals the very best going forward.”

The club is yet to officially comment on the development but the club will see the news as a blow especially as it was dealing with the revocation of their licence to play the Carl Reindorf Park.

The Ghana FA said on Monday that the ground lacked certain things to make it suitable for Premier League action and thus, the club had to put things right in order to host matches in Dansoman.

Sources say that team is already working on these improvements to secure the venue for the rest of the season.

Liberty will now have to find a coach for their impending Week 5 clash at WAFA on Friday at Sogakope.

GWPL Week 1: Revenge, upsets and the rise of Ophelia Amponsah.