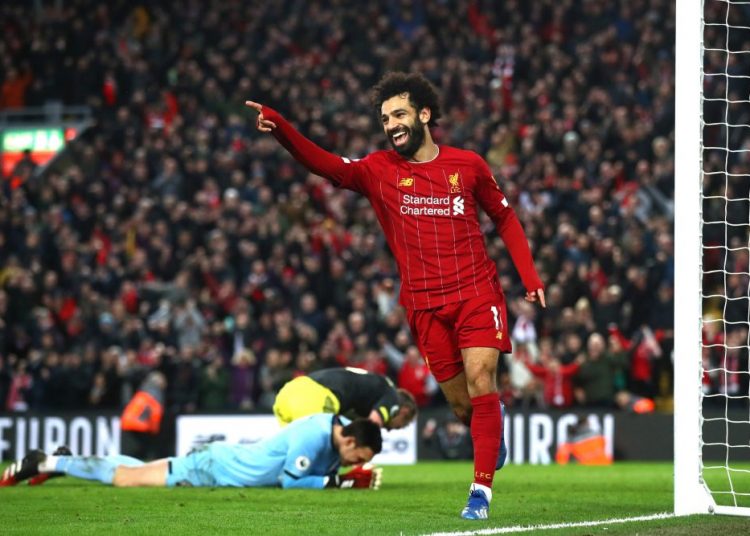 Liverpool equaled Manchester City’s record of 20 consecutive home victories in the Premier League with a straightforward 4-0 victory over Southampton at Anfield.

Second-half goals from Alex Oxlade-Chamberlain, Jordan Henderson and two from Mohamed Salah moved the Reds 22 points clear at the top of the table as their inevitable march towards the title continues.

Manchester United and Wolves played out an uninspiring 0-0 draw at Old Trafford in the late kick-off.

Bruno Fernandes made his debut for the Red Devils and looked promising in a game that will be quickly forgotten.

There was high drama elsewhere in the top-flight as Everton and Brighton both staged remarkable comebacks from two goals down.

Watford were seemingly cruising when goals from Adam Masina and Roberto Pereyra put them two goals up on 42 minutes – but their lead was canceled out before half-time.

After Antonio Rudiger scored twice for Chelsea in their 2-2 draw with Leicester earlier, fellow defender Yerry Mina did the same with two goals in first-half injury time.

Fabian Delph saw red for a second yellow but that didn’t stop Theo Walcott scoring a 90th-minute winner for the Toffees to complete a stunning 3-2 victory.

Meanwhile, Brighton fought back from 3-1 down to draw 3-3 at West Ham thanks to a controversial VAR-awarded equalizer from Glenn Murray.

In another big match at the bottom, ten-man Bournemouth held on to secure a priceless 2-1 victory over fellow relegation battlers Aston Villa, while Norwich earned a 0-0 draw at Newcastle.

A Vicente Guaita’s own-goal was enough to give Sheffield United a 1-0 victory at Selhurst Park.