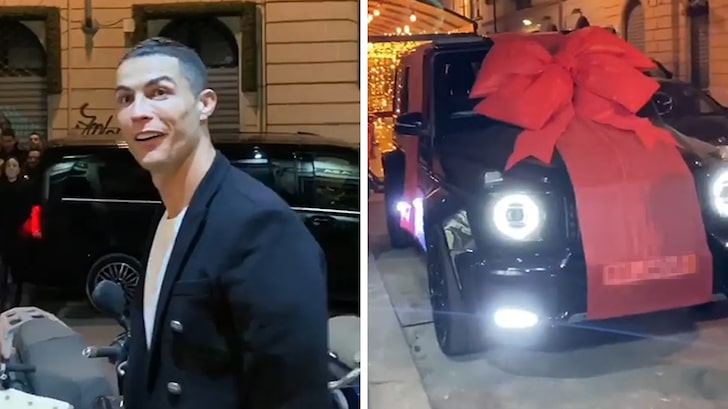 Cristiano Ronaldo was left stunned on Wednesday evening as girlfriend Georgina Rodriguez lavished him with a luxury car for his 35th birthday.

The Juventus striker appeared to be lost for words after being surprised with a brand new Mercedes Benz BRABUS following a dinner date at Turin’s Ristorante Casa Fiore.

Capturing the moment in a short Instagram video, Georgina, 26, looked on as Portuguese footballer greeted waiting friends and fans, among them his nine-year-old son Cristiano, Jr – the oldest of his four children.

Captioning the video in her native Spanish, she wrote: ‘Congratulations to the man of my life! What a desire to transport our love in your gift.’

Widely considered to be one of the best off-road vehicles on the market, the lavish gift can reach speeds of up to 62-miles an hour in just 3.8 seconds. 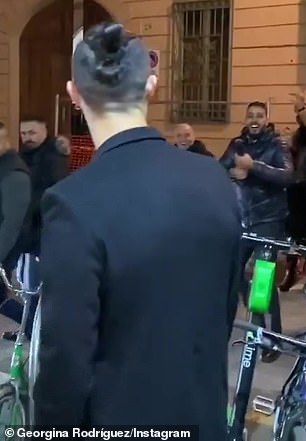 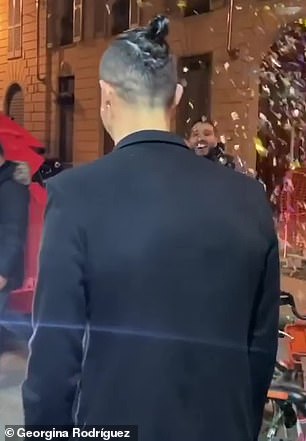 Here he comes: Cristiano was cheered on as he made his way onto the street, where confetti reigned down as he was presented with his birthday present

Ronaldo is believed to own as many as 20 cars, among the one-off Bugatti La Voiture Noire – reportedly the most expensive car ever built.

Reports suggest Ronaldo spent €11million (£9.49million) on the unique Bugatti which was first presented to the world at the Geneva Motor Show 2019.

The French luxury company built only one of the prototype supercar and it is a tribute to the 110th anniversary of the founding of the company.

The car is a modern interpretation of the mythical and legendary Bugatti Type 57 SC Atlantic, four of which were built between 1936 and 1938.

Speaking to Piers Morgan in 2019, the footballer admitted he owned ‘two of everything’ – including two Bugatti’s, two Ferrari’s, two McLaren’s and two Rolls Royce’s. 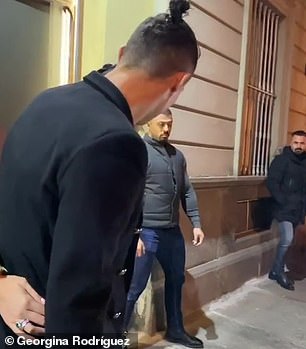 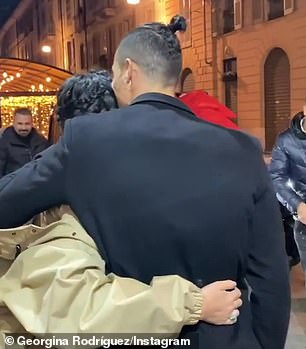 Thank you: Ronaldo embraced Georgina as he admired the Mercedes during their outing in Turin

Ronaldo’s birthday comes after Georgina referred to him as her ‘husband’ in a gushing post celebrating her 26th birthday on January 27.

Sharing a snapshot of herself and Ronaldo posing with their children, Georgina wrote: ‘Happy 26 for me, very happy. I can’t ask life more. Just a lot of health for my family and me and to always enjoy them.

‘Thank you all for your congratulations, flowers and therefore love. And Thank you to my husband for giving me the best of life, our children. I love you.’

In Spanish, ‘marido’ is often used to describe a common law husband, while ‘esposo’ is more commonly employed as a description for a legally wed male.

Speculation was rife that Ronaldo had quietly exchanged vows with the former Gucci shop assistant, following a report from Novella 2000 magazine in Italy.

But sources close to the Portugal captain have denied the rumours, branding all talk of the purported late August ceremony ‘fake news’. 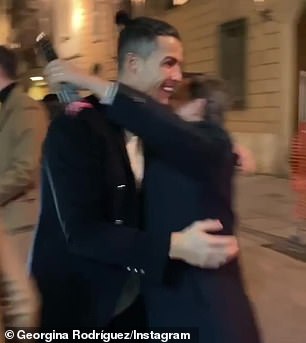 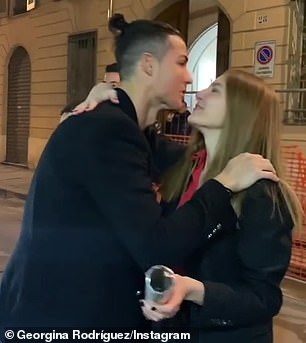 It’s all yours: The revered footballer was showered with affection outside Ristorante Casa Fiore 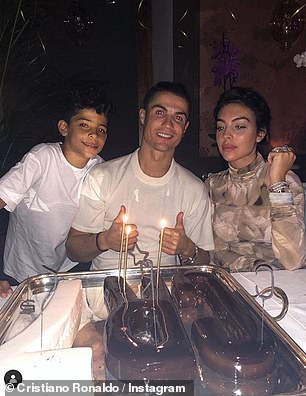 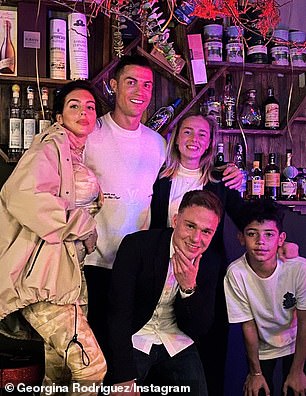 Good times: Earlier that night Ronaldo was joined by Georgina and Cristiano, Jr for a slap-up birthday meal in Turin 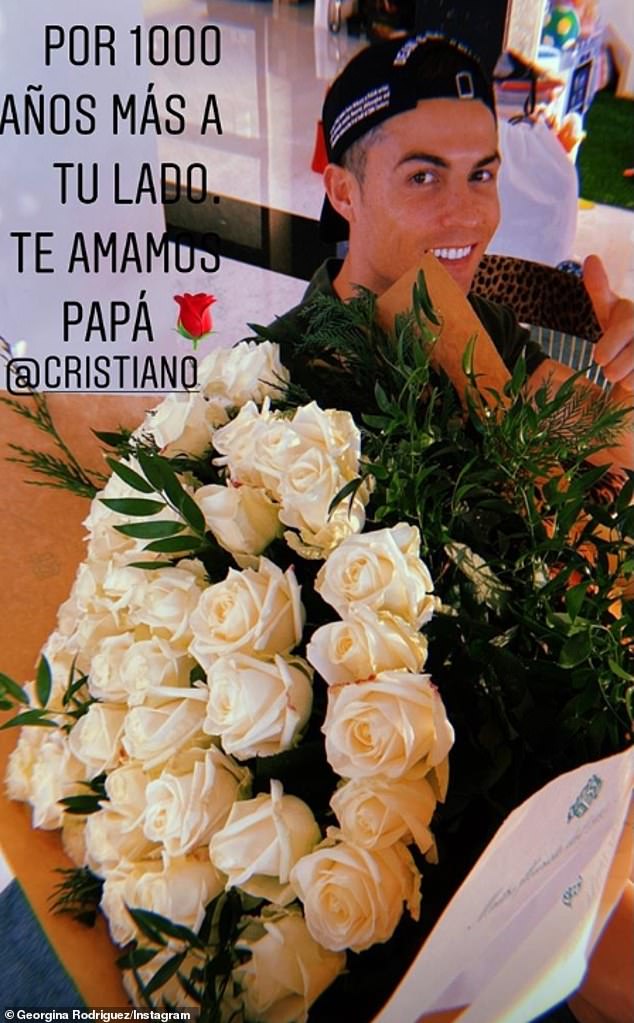 Say it with flowers: The footballer was also lavished with an extravagant floral bouquet

Ronaldo, who has been dating Georgina since 2016, previously revealed plans to marry the brunette, a move he claimed would be his mother Maria Dolores dos Santos Aveiro’s dream.

Speaking to Piers Morgan during an interview with ITV, he said: ‘She helped me so much. Of course I’m in love with her. We’ll be (married) one day, for sure. It’s my mum’s dream as well.

‘So, one day. Why not? It’s great. She’s my friend. We have conversations. I open the heart for her and she opens the heart for me.’ 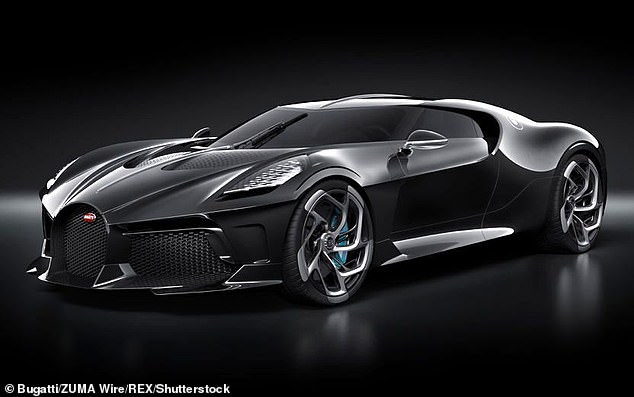 Stunning:  Ronaldo is believed to own as many as 20 cars, among the one-off Bugatti La Voiture Noire – reportedly the most expensive car ever built (pictured) 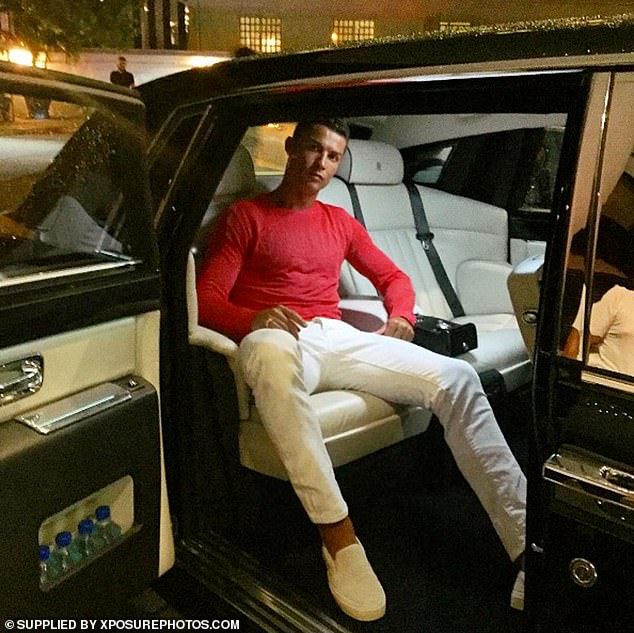 The high life: The footballer is known to have a taste for expensive cars, pictured here sitting in what appears to be a Rolls Royce Phantom 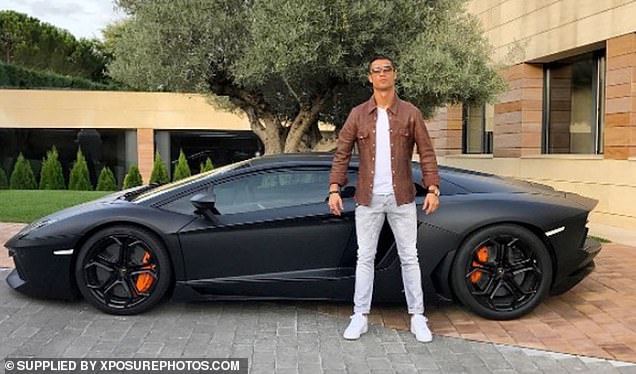 All mine: The footballer stands in the driveway of his home alongside a Lamborghini Aventador, just one of the cars in his collection 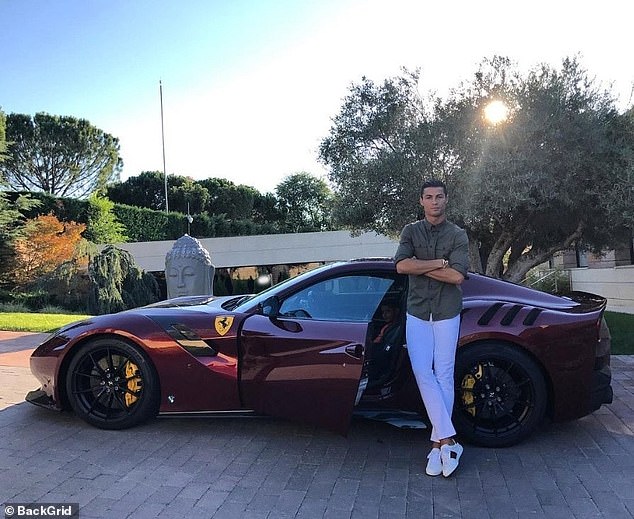 My ride: Ronaldo poses alongside his Ferrari F12 Tour De France, another rare model which the footballer owns

The moment Cristiano Ronaldo recieved a £93,000 Mercedes G-Wagon as a birthday present from girlfriend Georgina Rodriguez. 🎁