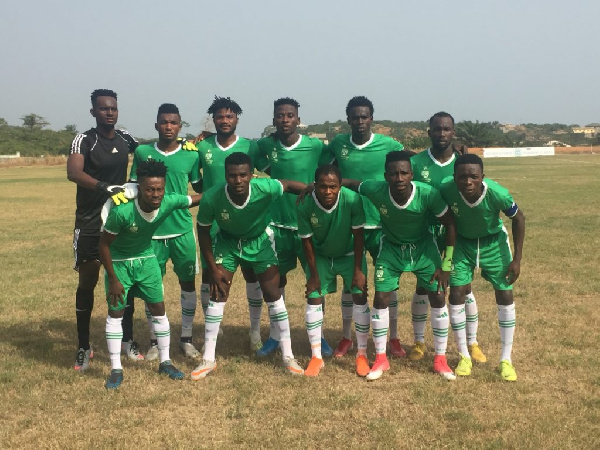 Elmina Sharks got the biggest scalp of Week 9 of the Ghana Premier League after they beat league leaders, Berekum Chelsea 3-1 at the Ndoum Stadium in Elmina.  Benjamin Boateng opened the scoring for Sharks in the 5th minute for Kofi Owusu levelled after 15 minutes for Chelsea. Boateng then struck twice in the second half to lift Sharks to three points.

Medeama joined Berekum Chelsea at the top of the league after they got a 1-1 with Karela United. Diawisie Taylor had given Karela the lead in the 30th minute but Prince Opoku Agyemang’s 6th goal of the season in the 87th minute gave Medeama a share of the spoils.

AshGold bettered their draw in Week 8 and got a 1-0 home win over Liberty Professionals in Obuasi. Appiah McCarthy’s first half injury time penalty and some poor finishing by the visitors handed the Miners their 4th victory of the season.

Hearts of Oak recorded their second goalless draw in as many days in the league after they failed to find the net away to Aduana Stars and the same score was the outcome of the match between Bechem United and Dwarfs at the Nana Gyeabour Park.

An Abdul Bashiru own goal gave Kotoko a 1-0 victory at Dreams FC in Dawu in what was a close game at the Theatre of Dreams.

Great Olympics may have beaten King Faisal away from home in Week 8 but they got their home loss when they were beaten 2-1 in Accra by Techiman Eleven Wonders. Musa Sulley handed the lead to Wonders in the 12th minute but Gladson Awako tied it up for Olympics in the 24th minute but 12 minutes later, Salifu Ibrahim put Wonders back into the lead and that was how the match ended.