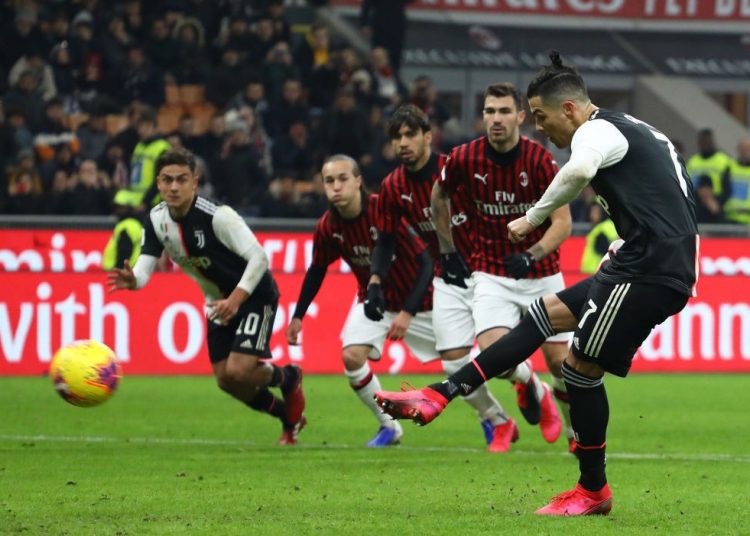 Portugal star, Cristiano Ronaldo is having a stellar 2020.

Having recently found the net for the 50th time for Juventus, becoming the fastest player to ever do so, the 35-year-old has gone on to score in every single game since the start of the year.

Against AC Milan in the Italian Cup semi-final on Thursday night, that record looked set to end as Juventus looked to be heading for defeat in the first leg.

Ante Rebic had put Milan ahead in the 61st minute, knocking the ball past Gigi Buffon in the Juventus goal.

However, a red card to Theo Hernandez handed the Turin side the advantage again and they piled forward in search of an equaliser.

And in the 90th minute a cross from the right was volleyed spectacularly by Ronaldo but his goal-bound effort was stopped dead in its tracks by the outstretched arm of Milan defender, Calabria.

A long wait followed with the referee consulting the VAR screen before awarding the late penalty to Juventus.

Ronaldo stepped up and fired home his second Coppa Italia goal of the season and his 24th overall in front of the record 73,000 crowd.

Check out Ronaldo’s effort and late penalty below

Before you call Ronaldo "Penaldo",this was what led to the penalty, I'm sure your GOAT can never do this!😆#MilanJuve pic.twitter.com/jYxXMOY0zt