This month in sports: When Hearts of Oak became Africa’s biggest club and 8th best in the world 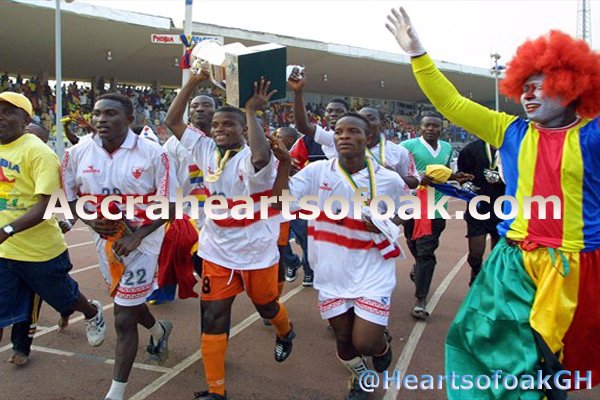 On February, 12 2001 Accra Hearts of Oak featured on the World Soccer Weekly Chart compiled by CNN.

Hearts of Oak had already beaten Zamalek of Egypt 2-0 on February 11, 2001, to lift the CAF Super Cup at the Baba Yara Sports Stadium.

Charles Taylor drew the first blood in Kumasi on the 11th minute to stun the visitors. Emmanuel Osei Kuffour then grabbed the second goal to seal the victory for Accra Hearts of Oak.

Before participating in the CAF Super Cup final, Accra Hearts of Oak had dismissed Al Ahly, Jeanne d’Arc and Lobi Stars in the group stages of the CAF Champions League in 2000. Accra Hearts of Oak beat every one of their opponents, accruing 14 points in the process.

Phobia stunned Esperance of Tunisia in their backyard, defeating them 2-1 with goals from the deadly duo, Ishmael Addo and Emmanuel Osei Kuffour. The reverse fixture saw a much better performance from Accra Hearts of Oak as they scored three late goals to come back from a goal down.

Emmanuel Osei Kuffour scored a brace before Ishmael Addo found the net late on to give the home side a 3-1 victory at the Accra Sports Stadium.

After a stellar performance, Accra Hearts of Oak rubbed shoulders with the likes AS Roma, Real Madrid, Boca Juniors of Argentina, and Manchester United on the list.