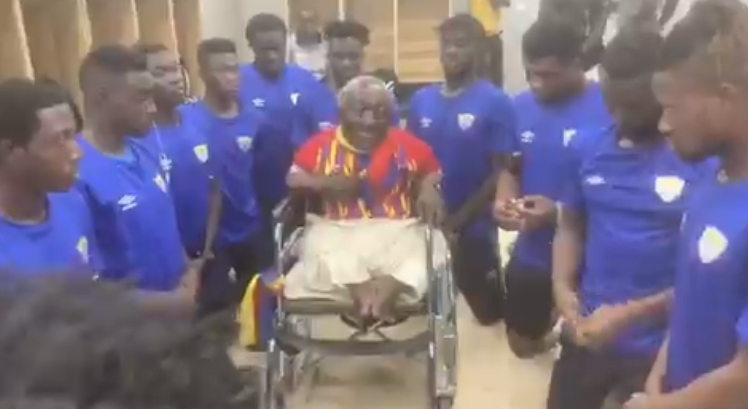 Following their dramatic 3-2 win, over Bechem Utd Ataa Abbey, the Hearts of Oak players were already on a high.

The moods of the already-excited Hearts of Oak players were improved even further by the visit of one of their longest-serving fans, 67-year-old, Ataa Abbey.

Hearts players knelt down in the dressing room around Ataa Abbey, who was in his wheelchair,  as he gave them a heartwarming speech, congratulating them on the important win.

He also urged them to go and play their very best for the rest of the season as the look to capture the Premier League title.

The players listened intently, some of them almost in awe, as Ataa spoke to them, sporting his Hearts of Oak jersey.

Hearts will hope that the late win over Bechem Utd, coupled with the encouragement from Ataa will kickstart their stuttering season.

The Phobians are currently seventh, with just four wins from their opening 10 games. They are, however, only three points from the top.

Take a look at the video below :

#MondayMotivation
67 year old life long supporter of Hearts of Oak, Ataa Abbey, who has been attending our games for over 50 years motivates our players after yesterday’s win.