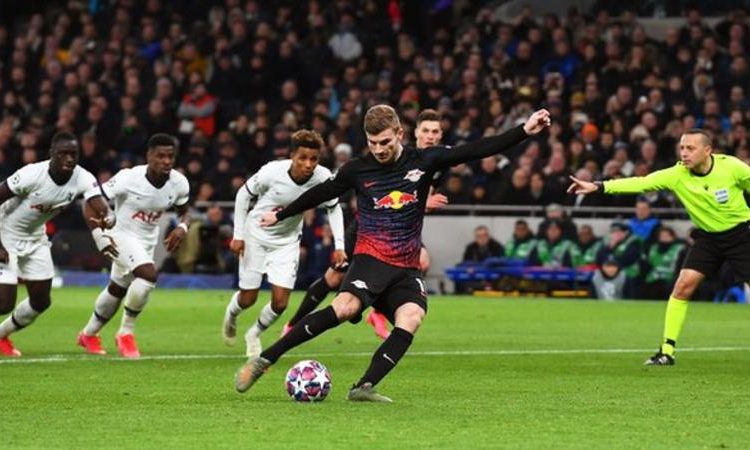 Tottenham face an arduous task to keep their Champions League hopes alive after defeat at home by the highly impressive RB Leipzig in the first leg of their last-16 tie.

Spurs, now stripped of long-term injury victim Son Heung-min with a broken arm as well as Harry Kane, were beaten more convincingly than the scoreline suggests as the side lying second in the Bundesliga demonstrated their growing stature.

And it was only a masterclass from goalkeeper Hugo Lloris that gives Spurs hope for the second leg in Germany, keeping Leipzig at bay with a string of outstanding saves before he was beaten by Timo Werner’s 58th-minute penalty.

Lloris turned Angelino’s shot on to the post and saved from Werner inside the first minute, later denying the striker once more from point-blank range.

He was powerless to stop Werner’s drilled spot-kick after Ben Davies fouled Konrad Laimer but kept Spurs in it with a crucial block from Patrik Schick.

Spurs finally forged chances of their own after the break, with Leipzig keeper Peter Gulacsi turning Giovani Lo Celso’s free-kick on to the post and Lucas Moura heading over from close range – but it is advantage to Julian Nagelsmann’s team.

Spurs suffer from lack of threat

The big question for Spurs and manager Jose Mourinho was how they would lay a glove on RB Leipzig after the blow of losing Son to a broken arm exacerbated the long-term absence of main marksman Kane.

And so it proved as, despite a much-improved second half, they could not apply consistent pressure to Leipzig, who will go into the second leg as firm favourites to reach the quarter-finals.

Spurs should not be written off after the heroics of last season but without Kane and Son it would be an outstanding feat if they were to overturn this deficit.

Mourinho at least had shining lights in goalkeeper Lloris and midfield man Lo Celso, the France keeper preventing Leipzig from reducing the second leg to little more than a formality.

It was an ominous sign that he was in frantic action inside the first minute and he can take credit for Leipzig not being out of sight already.

Lo Celso, meanwhile, showed his growing maturity as he drove Spurs forward, almost equalising with a fine 25-yard free-kick that was turned on to the post by the stretching Gulacsi.

It was, however, a night of frustration for Spurs – summed up by the sight of a stony-faced Dele Alli hurling a water bottle and a boot in the dugout after he was substituted.

Spurs must call on the Champions League spirit of last season to turn this last-16 tie around.