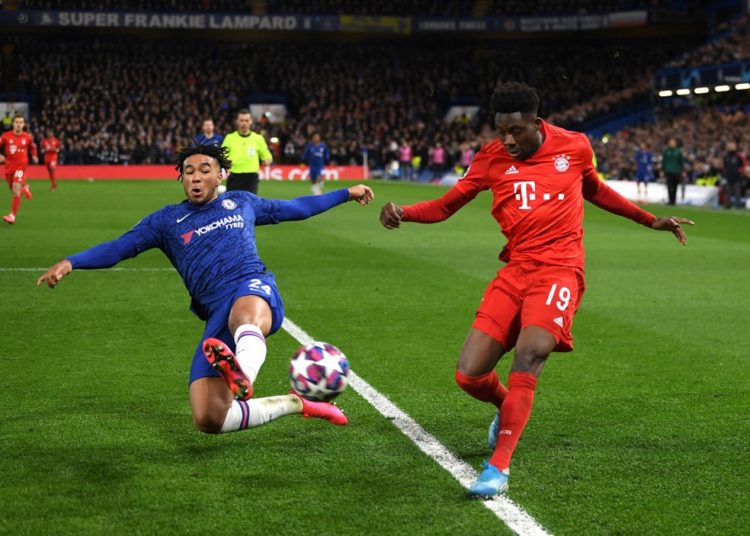 Born to Liberian parents who lived in a refugee camp in Ghana called Buduburam, Alphonso Davies is the Ghanaian who never played for Ghana.

His parents left the shores of the country when he was just five years old and has since lived in Canada before getting a move to German giants, Bayern Munich.

Alphonso Davies the Bayern left backs parents fled Liberia to Ghana during the civil war and gave birth to him in a refugee camp. Moved to Canada at the age of 5 from Ghana and he is here playing for Bayern Munich at 19 yrs. What a story #CHEBAY #NapoliBarca pic.twitter.com/z3mSfwIA1M

Alphonso Davies might be an FC Bayern pro today but the left-back, who was born in a refugee camp in Ghana 19 years ago, has travelled a long and difficult path – and his family suffered a lot. The son of Liberian refugees came to Munich via Canada and Major League Soccer.

The 19-year-old left-back joined Bayern Munich on July 25, 2018, after spells at Vancouver Whitecaps and Whitecaps FC 2.

The Bayern Munich defender received a lot of applause for his stupendous performance in his sides 3-0 away win over Chelsea on 25th February 2020 in the UEFA Champions League.

Exhibition of brilliance vs Chelsea

Put on the left side of the defense, the Ghanaian-born Canadian international was spectacular in every word of it as he contributed to his side’s victory at the Stamford Bridge.

On a night where both teams had to give their best, it was the speed and agility of this 19-year-old that helped FC Bayern blow past Chelsea.

Gotta say @FCBayernEN have been superb. Lewandowski with his first Champions League goal in the knockout stage in 2 years, made brilliantly by the incredibly rapid Alphonso Davies.

He was efficient all night and his effort was rewarded when he beautifully set up Robert Lewandowski to sink the home side in Tuesday night’s Champions League tie.

‘Who scouted Alphonso Davies for Bayern? The guy deserves a raise’.

Certainly, he does because of such a performance against Chelsea in the UCL. He showed the world exactly what he brings to his side even at age 19.

The statistics speak for itself for the Buduburam-born Canadian international.

He has been hailed as ‘King’

His demand will be high now but Bayern Munich who has proved a difficult club to bargain with will have a lot to fight for in keeping this talent. Manchester United, however, will regret not signing the defender when they had the chance to do so.

Manchester United had the chance to sign Alphonso Davies in 2018..
But no! They fucked up the transfer deal just like many others because they were more interested in "DNA Brits lads"..

FACT: Alphonso Davies is better than any LB at United since Evra left. pic.twitter.com/LJCopGfQLs

To cap a brilliant night, the young lad is focused on helping his side qualify to the quarter-finals of the UCL.

Deontay Wilder sacks trainer for throwing in towel against Fury, says he 'gave up too early'