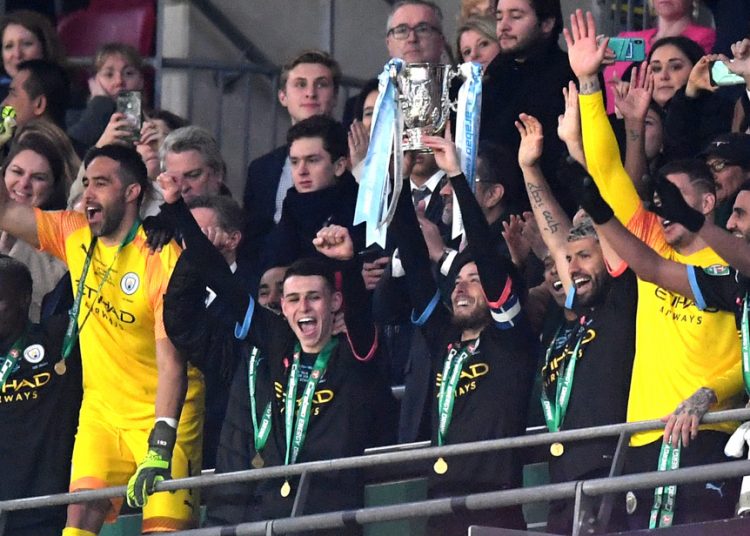 Manchester City are Carabao Cup champions for a third straight season as they got past a spirited Aston Villa side with a 2-1 victory at Wembley.

Pep Guardiola’s men looked far superior at the beginning with Sergio Aguero and Rodri putting them two goals to the good inside the first 30 minutes.

Villa pounced on an error from John Stones to pull one back just before the break via the head of Mbwana Samatta.

City dominated the rest of the final but nearly had to play an extra half an hour as Bjorn Engels’ late header was brilliantly saved onto the post by Claudio Bravo.

But City were good value for their win as they claimed the first major piece of silverware of the season yet again.

The Villans appeared to settle into the game quicker but the quality of their opponents makes them a constant threat – something Villa learned the hard way on 20 minutes as Aguero gave them the lead in the blink of an eye.

Rodri expertly picked surprise starter Phil Foden out, who headed back across goal and Aguero was on hand to put the ball past Orjan Nyland.

It was all City for the rest of the first half and their lead was doubled after half an hour when Rodri lost Frederick Guilbert to firmly head in a corner from the right.

However, there was controversy surrounding this goal as replays show City should not have been given the corner in the first place with the ball actually coming off Ilkay Gundogan last.

Things looked pretty desperate for Dean Smith’s men at that point but they found a route back into the game with Samatta’s well-taken header a couple of minutes before the break.

Villa had a bit of luck in getting the goal as John Stones fell over when dealing with a routine long ball – Anwar El Ghazi capitalised on the error and picked out the Tanzanian with an inch-perfect cross as new life was breathed into the final.

Pep Guardiola’s side controlled the second half but struggled to create many clear-cut chances. It threatened to turn into a bad-tempered final with Raheem Sterling booked for a late challenge on Guilbert, who had thrown the ball into the England man’s chest aggressively.

Meanwhile, Marvelous Nakamba avoided a red card for a firm challenge on Aguero, although the fact the midfielder won the ball was his saving grace.

Aguero and Bernardo Silva went close with efforts late on but not as close as Villa came to an equaliser when Engels rose brilliantly to head a corner from the right but City’s stand-in keeper pushed it onto the post.

But despite the let-off, very few could dispute that City were the deserving winners as they continue their dominance of the competition, winning five of the last seven League Cups.