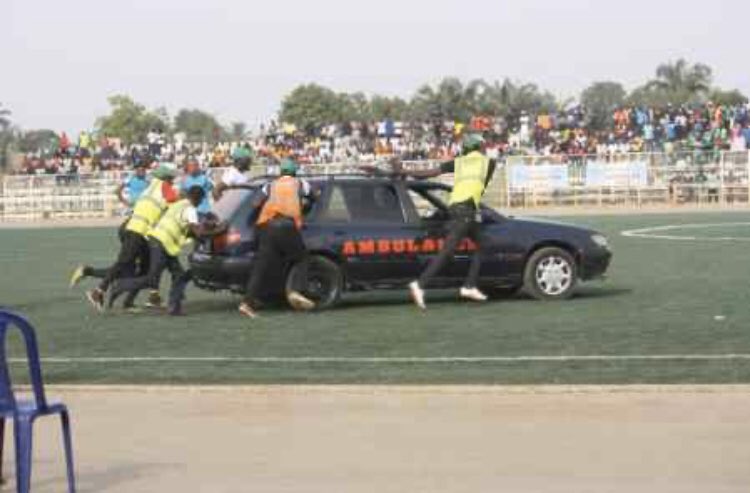 African football world was dealt a big blow over the weekend, when Nigerian professional player Chieme Martins passed away while in action for his side Nasarawa United during a league game.

Martins was knocked unconscious after a nasty collision during Nasarawa United’s clash against Katsina United in the Nigerian Premier League, and required immediate medical attention.

However, the emergency ambulance stationed at the stadium was unable to start after several attempts, leaving Martins stranded, eventually giving up the ghost in the most bizarre fashion.

AGONY! Nasarawa United players in tears after Chieme Martins was confirmed dead after Sunday’s NPFL clash vs Katsina United. Martins slumped following a collision, however, he gave up the ghost stranded as the Peugeot 406 ambulance stationed match venue did not start 😭🕯️😭😭🕯️ pic.twitter.com/PbIms2NkXP

The news of Martins’ passing filtered through the stadium a few moments after the final whistle, leaving his teammates and staff of Nasawara United absolutely dejected.

The Nigerian Football Association has since suspended all league matches in the country, until clubs fully comply the NFF Club Licensing Regulations in relation to provision of medical staff and equipment at various match centers.

The NFF has in conjunction with the Ministry of Sports engaged the LMC and reviewed the situation. As an immediate first step, the NFF has directed that no further match be played except there is a full complement…

…of the medical equipment and personnel as provided in the NFF Club Licensing Regulations.

All Match Commissioners and the host FA are to ensure they inspect all the facilities including carrying out test runs before giving go-ahead for any match to be played.