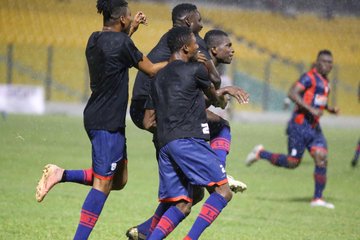 Legon Cities FC got their biggest ever win in the Ghana Premier League after they walloped WAFA 4-1 at the Accra Sports Stadium.

Cephas Doku got two goals on the day while Ebenezer Nii Addy and Fadili Yusif grabbed the goals for Legon Cities while Sampson Agyapong got the consolation for WAFA.

Asante Kotoko went to the top of table with a 1-0 win at Karela in Tarkwa on Friday thanks to a 2nd minute goal from William Opoku Mensah. 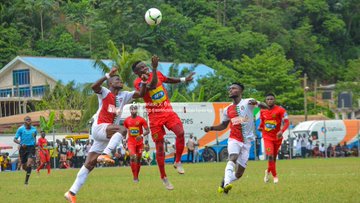 Aduana Stars joined Kotoko in top spot after they got themselves a goalless draw at AshGold.

Medeama also got the same result on their trip to King Faisal while a 3rd goalless draw was the result when Bechem United hosted Dreams FC.

Hearts of Oak recorded yet another draw after their match with Inter Allies ended 1-1 at the Accra Sports Stadium.

Samuel Armah gave Inter Allies the lead in the 37th minute but Mohammed Alhassan pulled the Phobians level with 5 minutes left on the clock. The draw was Hearts’ 6th of the season.

Goals from Maxwell Quaye in the 2nd minute and Phillip Nii Sackey in the 88th minute handed Great Olympics a 2-0 home victory over Ebusua Dwarfs.

At the Ndoum Stadium, Elmina Sharks overpowered Liberty Professionals by three goals to one.

Benjamin Tweneboah, Alhaji Mustapha and Augustine Owusu found the net for Sharks while a great individual effort from Mubarak Alhassan was what Liberty could muster on the day.