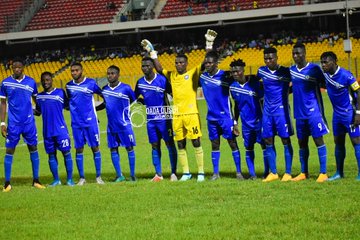 Accra Great Olympics has issued a strong statement condemning the actions of a known supporter of the team, Joseph Langabel, after their Ghana Premier League Week 14 clash with Hearts of Oak at the Accra Sports Stadium.

In a video that has since gone viral, Langabel is seen hurling abuse at the Great Olympics players as they walked off the pitch following their 4-0 loss to Hearts of Oak.

Langabel is seen telling the players off in harsh, abusive tones and went on to tell some of the players that they were unfit to wear the Olympics jersey.

In the statement which was signed by the club’s Public Relations Officer, Saint Osei, the club also expressed its massive disappointment at some security officials who were there and looked on for the supporter to proceed with the act they described as “nonsensical” and “barbaric”.

Olympics say have condemned the action and they have gone to say that they have lodged a complaint to the Police.

Our attention has been drawn to a video which has gone viral on social media in which a certain Joseph Langabel is seen on the pitch abusing our gallant players  all the way to the dressing room immediately after our game against Hearts of Oak yesterday.

Joseph Langabel’s nonsensical behavior and abuse of our players have no place in the modern game of football.

We wish to state that  the players of  Accra Great Olympics are humans just like all players the world over and do not deserve to be subjected to emotional and physical abuses of any form howsoever described.

Our players are professionals who deserve respect!

We further wish to condemn the act of the security officials at the stadium who  gleefully watched the said  Langabel carry out such condemnable acts of violence on our players.

Management condemns such barbaric act in no uncertain terms and calls on the National Sports Authority to safeguard the security of our sports men and women at the stadium.

We urge our players not to be distracted by this  shameful experience because management has lodged a formal complaint  with the police and are committed the safety of all Players.

We shall get back to winning ways soon!