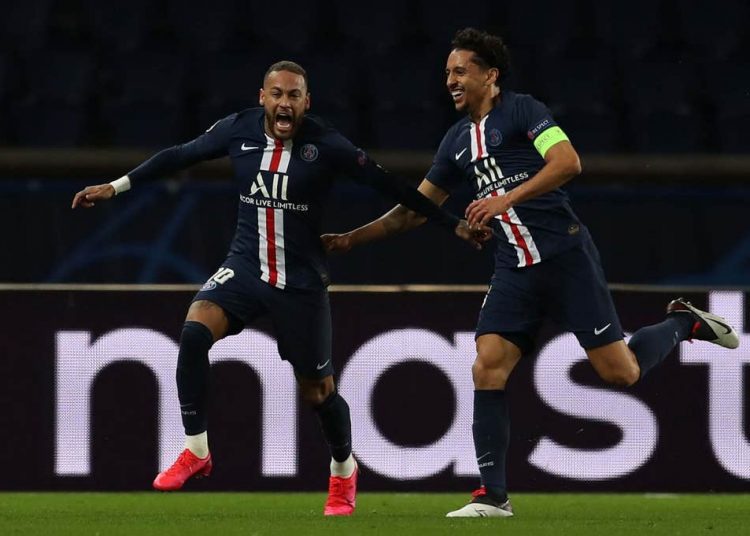 Paris St-Germain rid themselves of their Champions League curse as they overturned a 2-1 deficit against Borussia Dortmund inside an empty Parc des Princes to reach the last eight.

Concerns over the coronavirus meant fans were barred, but many gathered outside the stadium and celebrated when Neymar headed PSG into the lead.

Juan Bernat made it 3-2 on aggregate when he turned in Pablo Sarabia’s ball.

Dortmund’s Emre Can saw red late on after two bookings in quick succession.

PSG’s players celebrated wildly at full-time before greeting the hundreds of supporters who remained outside the Parc des Princes.

Like Valencia’s match against Atalanta at the Mestalla on Tuesday, this match was contested without the presence of supporters because of the country’s concerns over the spread of the coronavirus.

However, that edict did not deter hundreds who gathered outside the Parc des Princes – some wearing masks synonymous with the pandemic – chanting and setting off fireworks that were visible from within the confines of the stadium.

Dortmund had the benefit of their ‘yellow wall’ of supporters inside their Westfalenstadion three weeks ago, the question was how would PSG cope with trying to overturn their deficit without their 12th man.

Coach Thomas Tuchel had them on the front foot from the kick-off. They controlled possession for the first 25 minutes without making Roman Burki work before the Swiss keeper pulled off a brilliant save with his foot to turn behind Edinson Cavani’s angled strike.

Then came the breakthrough, as Neymar manoeuvered into the six-yard area to meet Angel Di Maria’s peach of a corner with a diving header. The Brazilian had writhed around in pain the previous three times he had hit the turf, this time he wheeled away in delight to celebrate with his bench – throwing caution to the wind regarding any coronavirus advice.

His eighth goal in nine Champions League games put PSG ahead on away goals before they took the outright aggregate lead just before half-time thanks to Sarabia. The former Getafe and Sevilla player surged down the right and delivered a low angled ball into the area which was deflected in by Bernat.

France forward Kylian Mbappe, who had not trained with his team-mates for two days because of a sore throat, was brought on after the break but made little impact as keeping Dortmund at bay took precedence. But despite conceding more possession to the visitors their Costa Rican keeper Navas did not have to stretch to make a save.

There was one sour note for Tuchel’s side after Di Maria picked up a yellow from the bench having got involved in a late fracas with some Dortmund players.

Lucien Favre’s Dortmund signaled their intent by playing a high line, but they rarely pushed PSG defense back.

Norwegian striker Erling Braut Haaland scored two of his 12 goals since signing in January in his side’s win in the first leg. But, except for narrowly failing to connect with a low ball from the right in the first half, he never got close to adding to his tally.

After the final whistle, several PSG players trolled the 19-year-old by recreating his yoga goal-celebration pose.

English winger Jadon Sancho, Dortmund’s top scorer with 19, stung the palms of Navas with two efforts but they were routine saves.

Dortmund’s day was compounded by the late red card for midfielder Can, who received yellow for a foul on Neymar before getting a second yellow from referee Anthony Taylor for his reaction.

Watch the highlights of the game here: