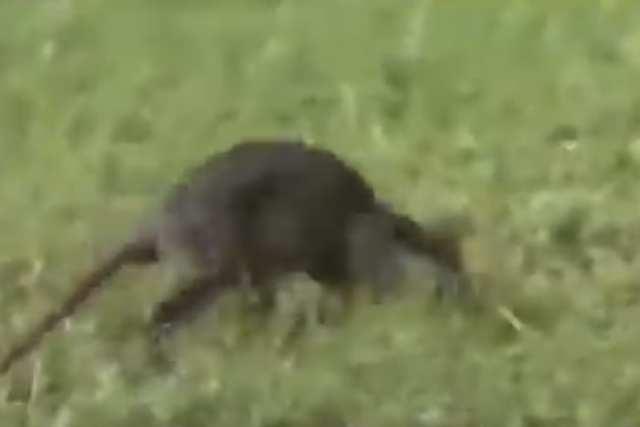 A rat was spotted on the field as Accra Hearts of Oak humbled their hometown rivals, Accra Great Olympics in the Mantse Derby on Wednesday, March 12, 2020.

The Phobians hit four unanswered goals against the “Dade” Boys in Game Week 14 of the Ghana Premier League.

Joseph Esso broke the deadlock in the 16th minute of the game. Benjamin Afutu hit a brace in the second half to put the game beyond the reach of Olympics.

Possibly stirred by the thumping Hearts were handing their city rivals, a rat poked its head out and made its way across the pitch after Afutu, 23, scored his second goal and the club’s third on the night.

The rat rushed through the grass, picked an object in its mouth and headed back.

Daniel Afriyie sealed an emphatic win for Accra Hearts of Oak on the 92nd minute of the game to send the Phobians 7th on the league log.

Aside from the show of class from the “True landlords of Accra”, the appearance of the rat was yet another highlight from the game.

Watch till the end.

A 🐀🐀 eating in the Olympics goal are🙊 pic.twitter.com/1vRRc4CxaJ