Ghana’s upcoming AFCON 2021 qualifying match against Sudan has been postponed after the Confederation of African Football made the this decision to suspend all of this round of qualifying matches due to the outbreak of the Coronavirus.

The Black Stars were set to take on Sudan in a doubleheader on March 27 and March 30, 2020 but in a statement signed by CAF’s acting Secretary General, Abdel Bah, CAF said the decision became necessary due to clubs’ unwillingness to allow their players to travel and also the fact that most of the African players who will be engaged in the qualifiers will be coming from worst hit coronavirus territories.

CAF initially insisted the games would go ahead but the latest development means a later date would have to be found to fix the games.

See the full CAF statement below: 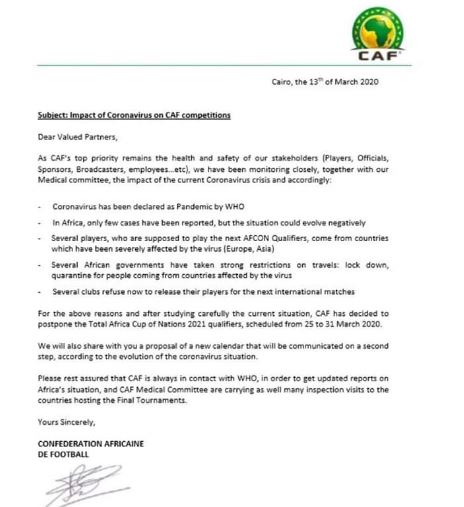