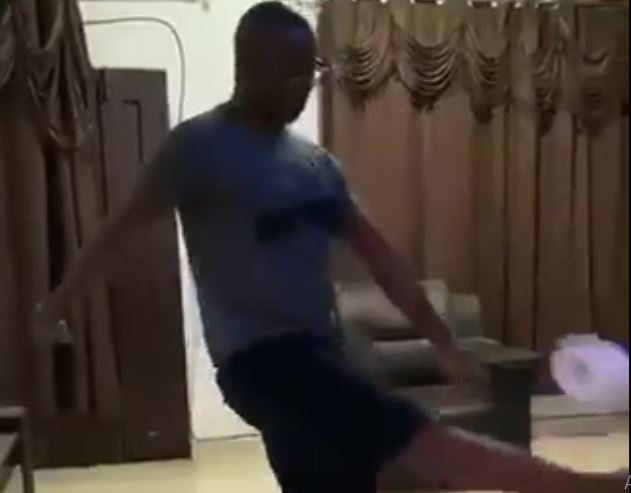 Some top Ghanaian sports journalists have joined the large number of people taking part in the #StayAtHomeChallenge that has taken over social media.

Saddick Adams, also known as Sports Obama, Michael Oti Adjei and Gary Al-Smith have all shared videos of themselves juggling a T-Roll as major sporting activities have come to a halt globally.

Saddick Adams was the first to start the trend among sports journalists in Ghana. He captioned his video “As the main striker of Adrobaa FC, I had to do the #StaySafeStayHome challenge.”

As the main striker of Adrobaa FC, I had to do the #StaySafeStayHome challenge.

We will beat this. pic.twitter.com/a81tip603H

He then threw the challenge to Michael Oti Adjei, Gary Al-Smith and his colleague, DS Sports.

Michael Oti Adjei accepted the challenge but could not juggle the T-Roll ten times.

Gary accepted the challenge and performed a lot better than Michael who literally could not keep the T-Roll on his toes.

Omni Media journalist, Fentuo Tahiru Fentuo was not left out of the challenge as he juggled the T-Roll in the comfort of his home.

For all the haters who said I could not do more than 3 touches.

From feet to head, and into the top corner. Flawless execution. #StayAtHomeChallenge pic.twitter.com/YSYLcgYLlI

What is the #StayAtHome Challenge?

The challenge has come about due to the Coronavirus pandemic which has forced a lot of people to stay indoors, as they try to limit their interaction with the outside world in hopes of curbing the spread of the virus.

The challenge requires that people try to juggle a roll of toilet paper by keeping it airborne as is done in a keepy-uppy in football.

One person does it and nominates others to do the same.

So far, superstars like Lionel Messi, have shared their entries on social media and they have thrown the gauntlet down to their friends and colleagues.